It’s all up to the president

It’s all up to the president 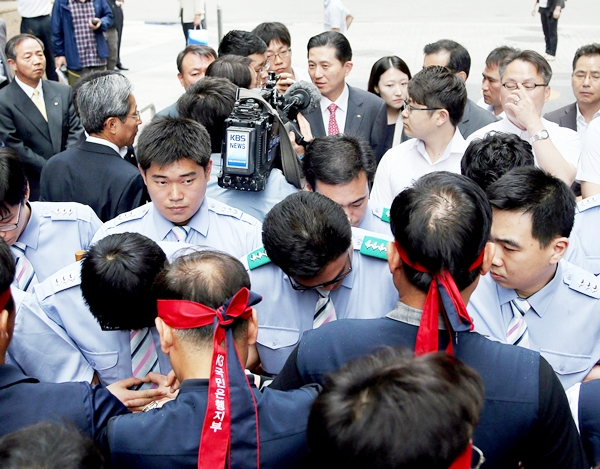 KB Financial Group Chairman Lim Young-rok had to go home last year after entry into his office was blocked by members of the group’s labor union who opposed his parachute appointment by the Blue House. [JoongAng Ilbo]

We somehow have grown accustomed to laying the onus for everything on the president. It isn’t right. The president is not almighty. She cannot and should not get involved with everything that goes on in society. But the KB Financial Group crisis is different. The president shares the responsibility. At the heart of the scandalous house feud in the country’s largest financial group was a power struggle between the group chairman and a flagship bank president who landed their jobs through different revolving doors. Financial authorities played the part of a pitiful referee who jumped into the fight too late after keeping mostly to the sidelines. If there had not been a revolving door practice in the first place, the feud would never have taken place. So who’s behind the appointments?

The presidential house approved the appointment of KB Financial Group Chairman Lim Young-rok last year. In other words, the president had the final word. There were protests, but the president did not hear of them. This is what I don’t understand. Former President Lee Myung-bak was criticized heavily for ruining the financial sector, or at least turning the clock back 20 years, with his heavy-handedness in seating top executives in major financial groups that formerly were nationalized and later were privatized. It has not been long since we saw the disastrous ramifications of revolving door practices.

The entanglement of officialdom with the financial sector has a long history. During the Asian financial crisis in the late 1990s, the government spent 168 trillion won ($161 billion) to bail out financial institutions. Thousands of people in the industry lost their jobs. We learned that if the financial sector loses ground, so does industry and the country’s economy. To build banks big enough to resist breakdown, the government again used tax funds to assist their mergers and acquisitions.

For the first few years, banks backed by government support generated huge profits. But when the economy slowed, so did their performance. A few people from the government slipped into the industry from the back door. The practice became brazen under the Lee Myung-bak administration. The government acted as if it owned the industry, as it has been in the case of KB Financial. Bureaucrats were tempted by fat paychecks and generous compensation. Both the industry and the government forgot the sacrifice of taxpayers. Lobbying and influencing followed. One bank executive recalled that high-ranking jobs at financial institutions were generously handed out by President Lee. Unqualified candidates, even financial illiterates, were seated if they had a connection with the former president. The Korean financial sector deteriorated as a result. KB, once a household bank brand, was the biggest victim, the executive said.

President Park Geun-hye, even as a member of the same party, had been a critic of Lee’s appointment style. But she dutifully followed his tradition. People who helped her during the presidential campaign were rewarded with plum jobs in the financial sector. Former Chung-Ang University professor Hong Ky-tack, despite a lack of experience in management and finance, became head of the Korea Development Bank Financial Group last year. Hong, who has been a member of Park’s think tank and transition team, openly said he arrived on the job via a parachute. The bank in charge of policy financing has been shaky under his leadership. He sacked the head of Daewoo Securities, which is an umbrella unit, just a few months before his term ended. He is widely expected to pick someone from the Blue House as a replacement. One bank employee shrugged and said, “What can we expect from a handpicked CEO?” Former Woori Bank CEO Lee Duk-hoon, who got the top seat at the Export-Import Bank of Korea in March, is an alumnus of Sogang University, the same school as the president. An auditor’s job at the bank also went to a professor who had been on Park’s election campaign. Kong Myung-jae, a business management professor of Keimyung University and also a Sogang alumnus, had no experience outside academics.

The past is past. KB Financial now needs new leadership. The financial group over the past 10 years suffered repeated failures and feuds from revolving-door appointments. If the legacy continues, the future of the financial group as well as the whole industry is doomed. Then, the onus will be entirely on the president.