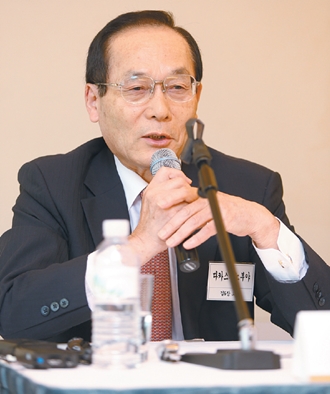 Nobuya Takasugi of Kim & Chang, speaks yesterday at the Korea Leaders Forum. Provided by the organizer

Despite the 1965 treaty that normalized ties between Japan and Korea, the relationship between the two neighbors remains complicated.

But away from the volatile tensions of politics, speakers at the 95th Korea Leaders Forum yesterday said the two countries actually have an interdependent and friendlier relationship. The forum was organized by the National Academy of Engineering of Korea.

Korea and Japan need each other from a business standpoint, said Nobuya Takasugi, senior legal adviser at Korea’s major law firm, Kim & Chang. Despite the global economic crisis in 2008, imports and exports between the countries have steadily grown, he said.

Some companies have cooperated directly with each other, such as LG Electronics and Toshiba on cross-licensing of optical disc products, noted Takasugi, the former CEO of Fuji Xerox Korea. Other Japanese and Korean companies are cooperating in China, India and Algeria, among other countries, he said, adding that the “current situation is that they are growing together.”

Takasugi attributed Korea and Japan’s cooperation and interdependence to comparable industrial structures and dominance in similar areas. “We’re acting based on supply and demand,” he said. “It has nothing to do with political tension.”

Understanding the relationship between the two countries is especially important considering recent developments in the global economic landscape. Im Chon-sok, a professor of international trade at Konkuk University, said Korea and China’s relationship, which has become cozier lately, should be understood in the context of a bigger picture.

“Since his inauguration in 2009, President [Barack] Obama has expressed his interest in the Asia Pacific region to resolve the slump in the American economy, and at its core lies Japan,” said Im. It is unlikely the region’s rising star, China, will topple the world’s largest economy anytime soon, and “Korea’s excessive development of the relationship [with China] has many risks,” he added.

The potential for Korea and Japan to coexist and cooperate within the global system runs much deeper than interdependence on a business level. According to Takasugi, the two countries have been continuously interacting on cultural, educational and municipal levels. “Those interactions have been growing irrespective of the political diplomacy of the central governments,” he said. “And these exchanges could become the engine to [change] dissonance into harmony.”