Dress codes an insight into jobs

Dress codes an insight into jobs 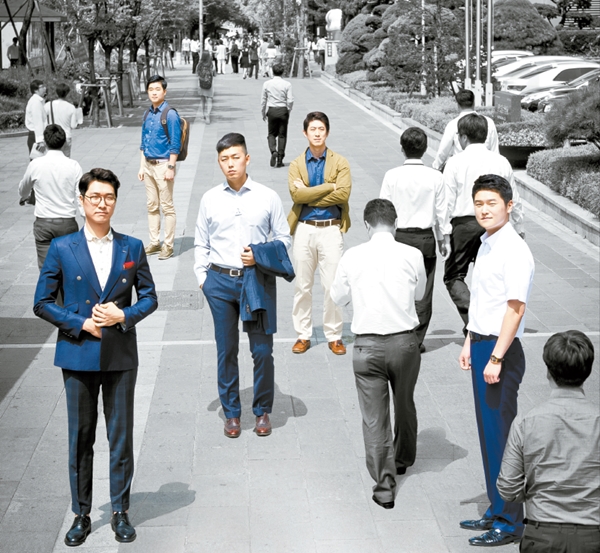 The late Steve Jobs left more than iMacs and iPhones behind as his legacy. He also created Apple’s corporate image with his own sense of style: a black turtleneck, jeans and a pair of New Balance sneakers. It was simple and minimalistic, just like Apple’s products.

Jobs made all of his public appearances and attended every product launch in this dress code, which was much different from other CEOs. His style struck people across the world, showing that executives can represent their businesses through their fashion choices.

“It is often the case that symbols [that pop up in consumers’ minds] substitute the actual corporate image,” said Kim Geun-bae, a business administration professor at Soongsil University. “What people actually see is a man in jeans, but the people have associated that image with innovation.”

Jobs built Apple’s image as modern, classy and friendly, and many Korean CEOs have tried to do the same.

Samsung Group Chairman Lee Kun-hee showed up in a pink jacket at a Samsung Electronics management meeting in 2006 to announce the conglomerate’s new motto: innovation and creative management.

Following their CEOs’ personal choices, more and more Korean companies are changing their office dress code to boost the corporate image on a daily basis.

John T. Molloy, author of the book “New Dress for Success,” wrote that successful businesses have a dress code that corresponds to their philosophy. He added that employers can use the dress code to send a message about the way they do business.

As the autumn hiring season has started and most conglomerates are taking applications, the JoongAng Ilbo studied male dress codes at 13 major Korean companies in a variety of industries. The study aims to give a sense of the atmosphere at each company and the company’s goals.

Each business had a distinct dress code that reflected their corporate motto, which differed noticeably depending on the area of business.

Hyundai Card employees have to stay formal and wear suits. Short-sleeve shirts are banned even during summer to emphasize the company’s professionalism.

KB and Shinhan Financial Groups both also want to look professional and reliable, but they show their intentions in different ways.

This summer, both KB and Shinhan tightened their dress codes to permit only short-sleeve button-down shirts, rather than allowing short-sleeve T-shirts as they did in the summer of 2013. The two finance companies tried to regain their customer’s trust by dressing formally after both suffered damage to their corporate image due to customer information leaks earlier this year.

“Once consumers get a bad impression of the company, they tend to think that products and services provided by the company are also bad,” said Beom Sang-kyu, a business administration professor at Konkuk University. “So it is effective when CEOs … have employees follow a more friendly dress code.” 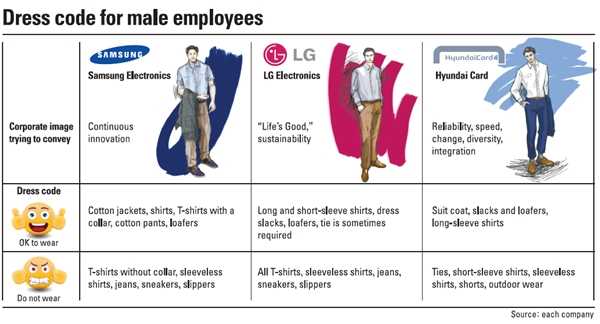 Hyundai Motor and Hyundai E&C were the only two companies surveyed that require their employees to wear ties. The automaker’s spokesperson explained that the Hyundai affiliates “have a corporate culture with hierarchy that is stronger than other companies, and at the manufacturers, most of the workers are men.”

But there have been indications of change at companies with a conservative corporate culture as they try to live up to the demand for creativity in the business world.

Hyundai Motor’s Namyang Research Institute, the company’s main R&D center, decided to get rid of its signature blue uniform in September last year on the recommendation of Chairman Chung Mong-koo. He said the company should relax the dress code to encourage employees in a business environment where creativity is a key factor in determining a company’s fate.

“In the past, Korean companies grew based on their manufacturing businesses and boosting cooperation among employees,” said Yang Yoon, a psychology professor at Ewha Womans University. “But now, generating creative ideas has become more important to them.”

Samsung Electronics has many high-level executives who are fashion leaders themselves. Yoon Boo-keun, president of the company’s consumer electronics division, is an exemplary case of a fashionista CEO. Influenced by Yoon, other executives are also choosing to wear slim-fit pants rather than sticking to old-fashioned wide-leg trousers.

“I met this Samsung Electronics executive in his 50s who was wearing a denim shirt, a pair of narrow trousers and sneakers,” said Lee Ji-hyun, a business administration professor at Sejong University. “I used to think that Samsung was strictly bound to a sense of formality. But after meeting him, I felt that Samsung’s internal atmosphere has changed a lot compared to the past.”

Lee explained that the change in corporate dress policy comes from a company’s desire to be the top competitor in its field.

“The employers don’t simply demand employees to dress neatly. They want you to dress well,” she continued. “Dressing well means that one is up to date on social trends.”