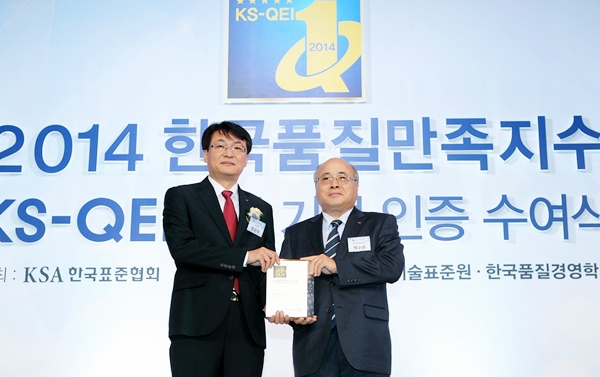 KT marketing director Han Jun-seok, left, is given KT’s award by Chairman of the Korean Standards Association Baek Soo-hyun. Provided by the company

Mobile carrier KT said it was chosen as the No. 1 company for mobile communications and high speed Internet on the 2014 Korean Standard Quality Excellence Index (KS-QEI) organized by the Korean Standards Association (KSA), which is under the ministry of industry.

The KS-QEI evaluates the quality of products and services based on customer satisfaction and a survey of experts.

KT said in a press release that it has focused on satisfying customers and making them a priority after announcing its new slogan “Single KT” in May.

The company also attributed its ranking on the KS-QEI to its high quality networks such as broadband LTE-A, Giga Internet, Giga WiFi and services such as its Sponge Plan, Essential Pack and Unprecedented Membership. The Sponge Plan allows a user to cancel their contract if they have made paymentsof more than 700,000 won, while Essential Pack has a music service and call notification if a user’s phone is off, and Unprecedented Membership invites subscribers to giveaways and events.

“We believe that KT became the No. 1 mobile carrier in the two sectors of the quality satisfaction index thanks to our continuous commitment to customers,” said Kim Cheol-soo, director at KT’s customer first management team.

The company also operates an SMS customer service center and a call center to respond to customer’ needs.

KT was the only mobile carrier that avoided a business suspension in the second half of this year. The government banned SK Telecom and LG U+ from doing business for one week each for giving illegal subsidies.

According to mobile communications industry, KT gained 32,000 new customers while the other two carriers were serving their business suspensions.