Fonda’s chopper from ‘Easy Rider’ is up for sale

Fonda’s chopper from ‘Easy Rider’ is up for sale 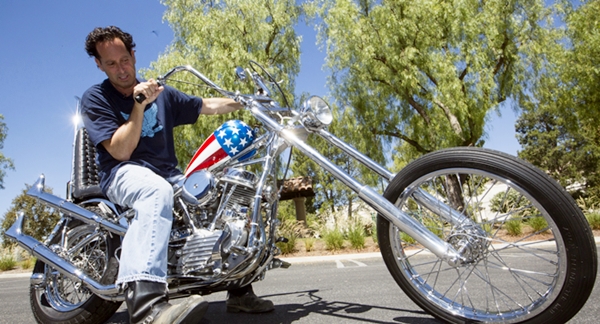 NEW YORK - The customized Captain America chopper Peter Fonda rode in “Easy Rider’’ has come to symbolize the counterculture of the 1960s. Now it’s for sale.

The auction house Profiles in History told The Associated Press that it estimates the Harley-Davidson will bring $1 million to $1.2 million at its Oct. 18 sale being held online and at its galleries in Calabasas, California.

The seller is Michael Eisenberg, a California businessman who once co-owned a Los Angeles motorcycle-themed restaurant with Fonda and “Easy Rider’’ co-star Dennis Hopper. Eisenberg bought it last year from Dan Haggerty, perhaps best known for his roles in the “Grizzly Adams’’ TV show and movies, who was in charge of keeping the custom-designed bike humming during the 1969 movie’s filming.

The gleaming stars-and-stripes panhead chopper with chromed hard-tail frame is accompanied by three letters of authenticity. One is signed by the National Motorcycle Museum, where it was displayed for 12 years. Another is from Fonda and a third from Haggerty.

The bike features a forward-angled front wheel and handlebars, fishtail exhaust pipes and a teardrop-shaped gas tank where the protagonists stashed their cash. It was designed with input from Fonda who insisted on it being decorated with the American flag.

“Easy Rider’’ is a classic road film about two drug-using, long-haired bikers, Wyatt (Fonda) and Billy (Hopper), who go on a cross-country odyssey to New Orleans in search of personal freedom and easy money.

Four motorcycles were created for the movie, but only one is known to have survived. It was used in the climactic crash scene in which Fonda is thrown off the bike.

“Three of the motorcycles were stolen, even before the movie was released, which was a sign of the overwhelming power that these motorcycles had,’’ said Haggerty. “They were never recovered.’’