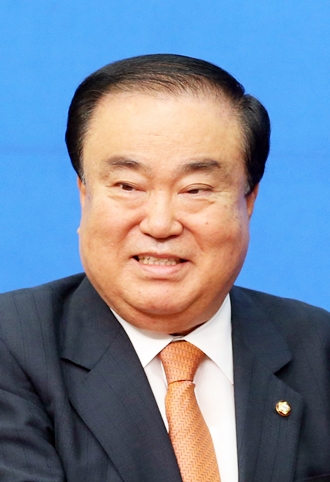 The opposition New Politics Alliance for Democracy elevated five-term lawmaker Moon Hee-sang to leader in the hope of bridging the party’s factions and containing the fallout from recent flubs and internal fighting.

During a closed-door meeting of senior party members yesterday, the former presidential chief of staff for Roh Moo-hyun was chosen as leader of the NPAD’s emergency committee, a job that gives him the power to set the course for the party until it holds a general election early next year to elect a new party chairman and supreme council members.

“The New Politics Alliance for Democracy with 60 years of history is teetering on the edge of falling apart,” said Moon after the meeting and his appointment. “I do feel immense pressure thrust upon me.”

He vowed to “do anything” to save the faltering party.

The opposition will report the appointment in a lawmakers’ meeting today and have it formally approved by the current floor leader, Park Young-sun, a formality that is expected to go without difficulty.

Park surrendered her interim leadership of the party Wednesday after an ugly internal revolt against her, although she decided to remain the floor leader.

Speculation is that Moon will try to heal the NPAD’s self-inflicted wounds by trying to bridge the differences among the party’s multitude of factions.

Analysts predict that Moon’s approach will keep him from pursuing the kind of dramatic reform moves attempted by Park, who wanted the NPAD to be more centrist.

It is the not first time Moon headed the party as head of an emergency committee. In 2005, he was the chairman of the Uri Party, the ruling party during the Roh government and a precursor of the NPAD.

When the party was in despair after a bitter defeat in the 2012 presidential election, in which its candidate Moon Jae-in lost to Park Geun-hye by a margin of 3.6 percent, Moon led it between January and May 2013.

The 69-year-old veteran lawmaker was credited with containing and minimizing the damage inflicted upon the party from its 2012 presidential defeat.

Moon is supported by members of the NPAD’s pro-Roh faction. Though he is generally deemed a pro-Roh figure, party insiders agree that the five-term lawmaker is well suited to run the deeply divided party because of the management and leadership style he has developed in the course of a 34-year political career.

Once Moon is installed, there may be more of a chance that the opposition and ruling party could agree on arranging parliamentary schedules to legislate bills that have been held hostage in the unsuccessful negotiations over a special law to investigate the sinking of the Sewol in April.

Until now, the NPAD has refused to vote on any other bills before the Sewol law is passed.