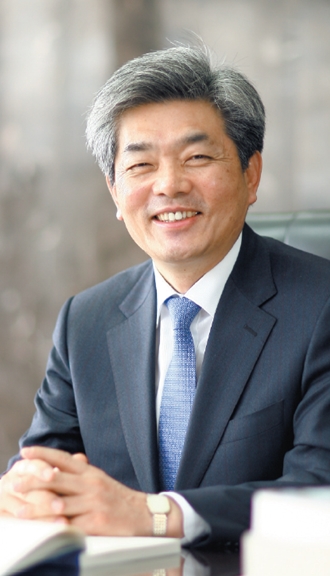 Choi Sung-eul, the president of Incheon National University (INU), took charge of the school during a period of heightened change, and after two years on the job he has been able to reflect on his accomplishments so far.

Since 2012, Choi has been involved in numerous projects to expand the school’s research capabilities, implement creative education reform and internationalize the university. INU secured some 44 billion won ($42.1 million) for those undertakings, as well as 4.8 billion won in state funding.

Since 2012, 69 new professors have been recruited, five of which are foreign professors working full time. Thirty-one of those professors were hired early this year.

“If such high-quality educators continue to be recruited, in five years’ time, we can look forward to INU professors’ research capabilities reaching a considerable level,” Choi said.

The Korea JoongAng Daily recently conducted a written interview with the INU president. Sept. 29 marks his second anniversary since he became head of the university.

Earlier this year, INU was selected by the Ministry of Education as a part of its University for a Creative Korea (CK) project, the Korean government’s efforts to foster outstanding students through investing in specialized departments and college programs nationwide.

The ministry plans to spend 1.2 trillion won over five years on these educational institutes, an initiative that started this year.

Under Choi’s oversight, INU has so far opened a new Graduate School of Convergence Science and Technology, established its own Institute of China Studies and has continued to hire fresh talent, in keeping with his previous pledges.

But perhaps the biggest shift is that the school became a national university last year, representing the city of Incheon as well as Gyeonggi. INU started off as a private college in 1979, later becoming a city council-funded university in 1994.

“In particular, we hold in high regard the great efforts of our school officials, Incheon city and local lawmakers in enabling the memorandum of understanding that transformed us into a national university,” Choi said.

“And through the school’s efforts, student response has been positive as well,” he added.

INU gained increasing popularity for its spacious campus, the filming location for the hit drama “My Love from the Star” (2013-2014), which starred actor Kim Soo-hyun and actress Jun Ji-hyun.

INU is the only national university with a campus in Incheon’s Songdo International Business District, envisioned as a global hub for education and green growth.

Q. Can you tell us about INU being designated as a part of the Education Ministry’s Creative Korea project?

A. INU was designated as a part of the Education Ministry’s project to foster local universities and specialized departments, also known as the CK Project, which was announced on July 1, and received national funding of 3.1 billion won, which will amount to some 15.5 billion over the next five years. Of metropolitan schools, INU ranked eighth in the funding it will receive from the ministry [out of 28 schools]. … We see this as the result of our continuous efforts to reform our school in line with INU’s Songdo Vision for 2020 as well as to procure national funding.

How has the school managed success in raising funds and investment over the past two years?

Since we became a national school, for the first time this year, we received from the government funds of 4.8 billion won and 440 billion won for BTL (Build-Transfer-Lease) projects. The BTL project fund of 44 billion won will go toward INU’s construction of a second dormitory for the school, which will be completed by 2016, house 1,130 students and cost 72.2 billion won. … There are currently 956 students residing in INU dorms, with 565 rooms [with a capacity of 1,130 people]. And with the addition of a second dormitory, the schools’ housing capacity will be raised to 2,095 students, which will be helpful in enabling the expansion of student-exchange programs with universities abroad. [Under the BTL system, private builders can recover investments through constructing schools or other public facilities and use them for a certain time before eventually transferring ownership to the government, then receiving government lease payments.]

In March, INU received 2.5 billion won in state funding from the Small and Medium Business Administration (SMBA) to foster entrepreneurship education programs. Can you tell us more about this?

The SMBA, in order to encourage start-ups for students and civilians, chose to support universities that have excellent records when it comes to the infrastructure needed to foster entrepreneurs, and plans to establish youth venture clusters by region. … Competition among universities to be selected for this project was fierce, and INU was chosen because it boasts ideal conditions for fostering global start-ups, with links to over 130 academically related agencies such as Incheon Technopark and the Songdo International Business District.

INU has been working toward exchanges with universities abroad and was designated on the Education Ministry’s 2013 list of schools that can recruit and maintain foreign students announced. Currently, INU has concluded international academic exchange agreements with 110 universities in 27 countries and has 400 foreign students.

The school must have drawn global attention from the popularity of the drama “My Love from the Star.”

We are experiencing a great promotional effect, not only from Korea but from abroad, because INU was a major shooting location for “My Love from the Star.” The drama’s highest viewer ratings reached nearly 30 percent, and it ran from November last year to February, during which the drama was shot in different parts of the INU Songdo Campus. INU began to run a “My Love from the Star” campus tour program in March, and with the Incheon Asian Games in September, we are working with other partners to develop a more diverse program.