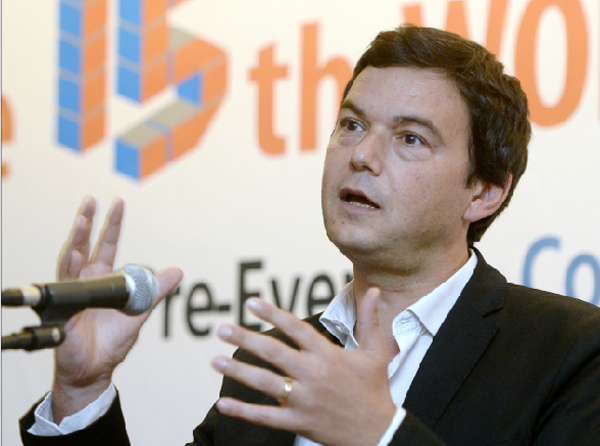 Thomas Piketty, the French economist and author of the sensational book, “Capital in the Twenty-First Century,” said yesterday that income and wealth inequality will become an important issue in Korea as the country’s economic growth slows down.

At a special lecture held at the Hotel Shilla in central Seoul, he said that many countries, including Korea, are facing inequality problems will have to make changes.

“In Korea, the level of inequality of income is not as high as the U.S.,” he said. “But it is rising higher than that of Japan and Europe.”

“A measure for Korea to reduce income inequality will be making the educational system open to everyone including the poorest class,” he added.

Korea has the highest spending on private education among OECD countries, he said, adding that “Increasing public investment in education to make it equal for all will help the Korean economy’s growth.”

Piketty was visiting Seoul for the first time to attend a forum and give lectures.

“In eight advanced countries including the U.S., Germany, U.K. and Japan, the difference between the capital returns and growth rates has been constantly rising,” he said. “There can be many reasons, such as price changes in properties and stocks, and privatized public assets.”

Piketty said the marginal tax rate for the richest class has been lowered, contributing to a concentration of wealth.

“When wealth is disproportionately concentrated on the top, the economy heads toward an extreme situation,” he said. “There needs to be adjustment in the market, like using the progressive taxation system.”

“If the authorities conduct investigations on distribution of income and wealth in a systematic way, they will be able to find out income and wealth ratio of the rich class to that of lower classes,” he added. “This will give an opportunity to talk about solutions in a democratic way.”

The economist said he is collecting data about Korea’s wealth, which he will analyze in the next edition of his book.

As for increased deregulation in Korea, the economist said he supports competition that promotes growth.

“But the Korean economy may not keep growing forever,” he said. “The current growth pace will not continue for the next 20 or 30 years.”

And deregulating the financial industry can be dangerous, he added.

“High salaries given to executives of financial institutions have added to the inequality problem,” he said. “Loosening the grip on the industry won’t help the real economy grow, so excessive deregulation for that industry is not desirable.”