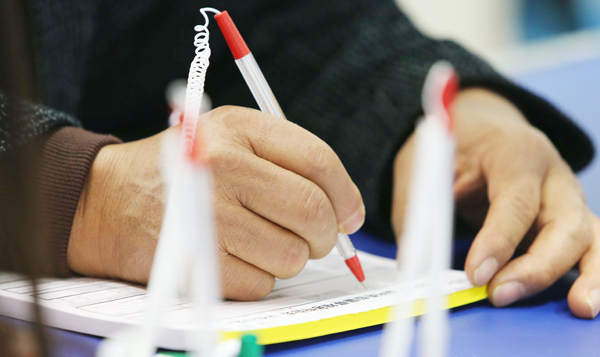 When I heard that some people have plastic surgery to get a job, I thought they were crazy. When I first got hired, getting a job was not as challenging, and people were not so desperate to change their facial features to find one.

I was also shocked when I read a survey by Job Korea that said a hiring manager spends an average of 7.8 minutes reviewing a resume, while less than five minutes is allotted for six out of 10 resumes.

It’s understandable. When a conglomerate wants to hire 100 new employees, it gets 3,000 applicants on average. Spending 10 minutes on a resume could add up to 500 hours. But it is doubtful that 7.8 minutes is enough to select a candidate.

A few years ago, I graded 400 essays in one week. On the first day, I read them thoroughly, but as time went by, I paid less attention and was uncertain whether I was grading the papers accurately. The final grade was to be determined by an average of scores by different graders. My experience has taught me that there is a possibility of making a mistake when thousands apply at the same time. The grader’s error could be 1 percent or 2 percent, but it's 100 percent failure for the one who doesn't make it through the screening process.

A more surprising fact from the Job Korea survey was that 34.3 percent of hiring managers responded that the candidate's photo is the first thing they look at. It is natural to pay attention to the photo first, because it stands out on a text-filled resume. But it produces bias. In my essay-grading experience, handwriting played a factor. It was easier to read a neatly written essay. When I grew tired toward the end of grading, I didn’t feel like reading an essay with bad handwriting. But this was unfair because the essay should be evaluated based on composition, content and flow, not the handwriting.

Even more astonishing was that 4.7 percent of the hiring managers in the survey said that the photo was the most important part of the resume. Considering there are second and third interviews, a good photo does not guarantee a job. But because of hiring managers who prioritize photos on resumes, many job seekers consider plastic surgery. Getting hired is often compared to a battle, and when even 1 percent of hiring managers say the photo is important, job seekers will try to satisfy them. So how can a generation of people who are already employed blame a generation struggling to find jobs?

In the United States, most companies don’t allow photos on resumes because of potential discrimination against ethnicity and appearance. We need to get rid of this unreasonable practice, too. Let’s take photos off resumes. If appearance is important for a certain position, it can be determined in the interview. There will be no need to argue that applicants don’t need to get plastic surgery. In the end, companies need to make a choice. When the decision against resume photos is made by an authority, it will have a substantial effect. Companies should enforce this rule.