Automakers are ill-prepared for new regulations

Automakers are ill-prepared for new regulations 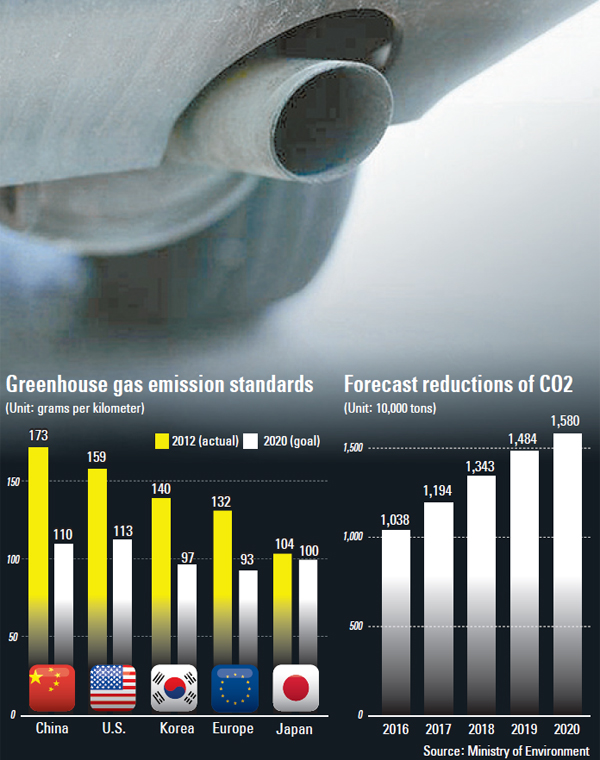 Although the low-carbon vehicle fund system, which subsidizes cars with low carbon dioxide emissions and levies a tax on cars with high emissions, was postponed earlier this month, local automakers still are not pleased as the government is instead increasing restrictions on greenhouse gas (GHG) emissions and boosting fuel efficiency standards.

The Ministry of Environment and the Ministry of Trade, Industry and Energy last week announced details of the revised emission and mileage standards that will apply to cars from model years 2016-20.

Automakers can choose which standard - either GHG emissions or fuel economy - they will follow based on the technology they have, but they will be fined if they fail to meet the standard. More vehicles will be affected by the new standard.

Currently, emission and mileage regulations only apply to passenger cars or vans that weigh up to 3.5 tons and transport 10 or fewer passengers. But in 2016, vans and commercial vehicles that can carry up to 15 passengers will also have to comply with the standards, which are different from that of passenger cars.

“Korea will be regulating GHG emissions of mini-commercial vehicles from 2016, but in the United States or Europe, these types of vehicles are already under regulation,” the environment ministry said in a release. “These vehicles’ standards are 166 grams per kilometer for the emission and 15.6 kilometers per liter for the gas mileage.”

Restrictions will also be increased for small automakers that have annual domestic sales of 4,500 units or less. Currently, the government allows the small carmakers leeway of 19 percent on emissions and gas mileage standards, but for the next model year it will be lowered to 8 percent.

“It is a situation in which pre-emptive measures and development of automobile emission reduction technology are needed as greenhouse gas emission regulations are getting stricter globally,” Park Yeon-jae, director of the Ministry of Environment’s environmental and transportation division, said. “Considering that about 70 percent of locally produced vehicles are exported, automakers have to meet similar emission levels anyway.”

However, automakers say it will be almost impossible to meet the government’s new regulations and complained that Korea’s vehicle market is different from other countries

“While the Japanese or European auto market is filled with small or diesel vehicles that have high fuel efficiency, midsize and large gasoline sedans are popular in Korea,” said an official from a local automaker. “You can’t just change consumers’ preferences.”

Data from the Korea Energy Management Corporation shows that no local or imported models can currently satisfy the fuel efficiency standard of 24.3 kilometers per liter. But it has been reported that some foreign auto brands will release diesel and hybrid cars that can satisfy the revised standards, starting next year.

Excluding electric vehicles (EV), Hyundai Motor’s Avante 1.6 LPI hybrid is the only Korean car that has a combustion engine that can meet the GHG regulations of 97 grams per kilometer. Seven imported models already qualify for the 2016 emission standard.

The environment ministry acknowledged that the purpose of the revised standards is also to encourage automakers to come up with better technology in GHG emission reduction and enhancing fuel efficiency.

If an automaker develops better technology for a vehicle and it is certified by the government, it can get up to 7 grams per kilometer knocked off of its GHG emission calculation and up to 1.8 kilometers per liter more on its fuel efficiency.

In addition, the ministry said that a car with GHG emission of 50 grams per kilometer or less will be counted as 1.5 units sold if one vehicle is sold, and zero GHG emission vehicles will count as two units sold, which will give automakers an advantage in calculating their fleet average emissions and fuel efficiency at the end of the year.

While local companies like Hyundai lag behind, foreign companies that have been investing heavily to meet environmental regulations in their own countries have said they are confident in reaching the goal.

“The tightened environmental regulations are a global trend and our group has already been preparing for this movement for long time,” said an official from BMW Korea.