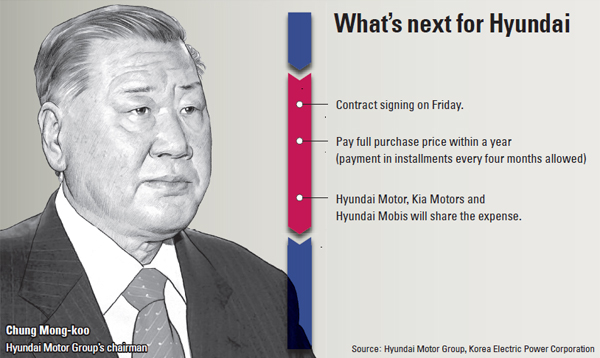 While the bidding result announced Thursday was certainly good news for the Korea Electric Power Corporation (Kepco), as the debt-ridden public corporation can reduce its debt ratio by 20 percent next year, some were concerned Hyundai could suffer a winner’s curse.

It was reported that Chung pushed for the 10.5 trillion won bid to the astonishment of Hyundai Motor’s executives.

After his bid-preparation team recommended a range of 4.4 trillion won to 5.1 trillion won and said Samsung was expected to offer about 5 trillion won, Chung rejected it, saying it was not about the money. The chairman was quoted as saying that there would be no more opportunities for Hyundai if it failed to acquire the land.

Establishing a Gangnam Global Business Center (GBC) is the last of Chung’s four main business goals. The other three were becoming the world’s fifth-largest automaker, acquiring Hyundai Engineering and Construction and establishing a steel mill.

Hyundai was rebuffed on its plan for a GBC in 2006, when it attempted to build a 110-story building for its headquarters in Ttukseom, Seongdong District, eastern Seoul.

However, despite its ambitious goals, Hyundai Motor Group lost 8.4 trillion won of capitalization on the local stock market on Thursday from nose-diving shares of Hyundai Motor, Kia Motors and Hyundai Mobis.

“Investors’ fear over Hyundai Motor Group’s financial burden grew, while the company’s global competitiveness is being threatened by the weak yen and domestic market conditions worsen,” said Kim Yong-koo, an analyst at Samsung Securities. Hyundai winning the bid clearly was not good news for its shareholders. 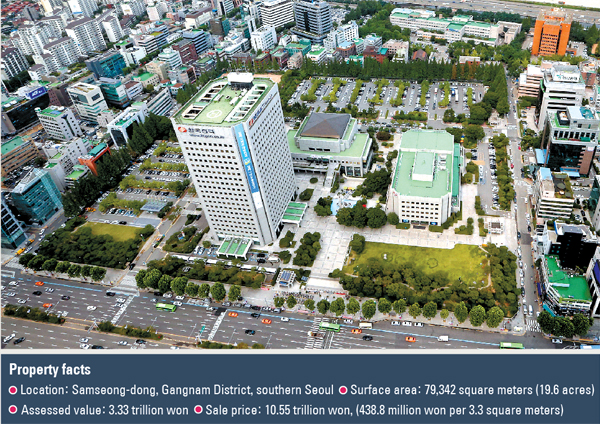 On top of the purchase price, the automaker must pay about 500 billion won in taxes and 1.34 trillion won in contributed acceptance to the Seoul Metropolitan Government by 2023. Including construction costs of 5 trillion won to 8 trillion won, the price tag for the GBC could reach 20 trillion won.

“Although earnings will not be affected, the bid will have a negative impact on stocks as investors worry that dividends will be reduced,” said Kim Hyung-min, an analyst at KTB Investment and Securities.

But another observer was more positive.

“As Hyundai Motor, Kia Motors and Hyundai Mobis possess 24 trillion won in cash, the bid and the landmark construction are not enough to take a heavy toll on their financial condition,” said Seo Sung-moon, an analyst at Korea Investment and Securities.

Hyundai will also bring together all of its 30 some affiliates by constructing the headquarters at the site. It was reported Hyundai has been spending more than 200 billion won annually in rent for its affiliates’ office spaces.