Alumni choir bound by a love of singing

Alumni choir bound by a love of singing 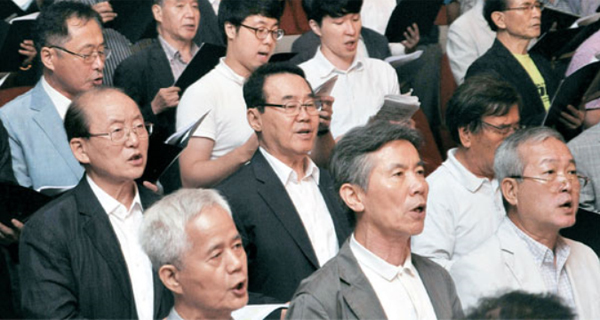 An eight-school alumni high school chorus rehearses on July 25 at Dongjak Culture and Welfare Center in Seoul. Though they differ in age, occupation and school, they are unified by the music they sing together. The chorus expects to expand soon to include 12 schools. By Jang Ryeon-seong

As the curtain rose, 300 gentlemen appeared on stage, singing in a chorus.

They are all different ages and hold different jobs, but there is one common thread among them: The men developed a passion for music while in high school and have since incorporated that interest into their daily lives.

However, the singers aren’t all technically classmates. They are graduates from eight high schools scattered around the nation, finishing in different years over the decades. Together, the 300 men represent Gyeongnam, Gyeongseong, Daejeon, Dongseong, Baejae, Busan, Seoul and Yangjeong high schools.

Their most recent performance was on Sept. 13, in the 2014 Korean High School Alumni Chorus, an event held at KBS Hall in Yeouido, western Seoul.

“Even though we are from different high schools, we agreed that we are alumni, bound together by a passion for music,” said An Hui-dong, the head of the alumni chorus for Busan Middle School and Busan High School, located in Seoul.

The 300 singers pulled out all the stops for their show, expressing all the emotion they felt from within.

After the two-hour show, the audience - numbering 1,300 strong - enthusiastically applauded, and many children hopped around trying to eye their grandfathers on stage.

The chorus has doubled in scale since a concert last November, in which choruses from Gyeonggi, Gyeongnam, Busan and Seoul high schools participated.

The eight-school alumni chorus was organized after the November show when An asked alumni high school choruses throughout the country to join together to organize a national alumni chorus. He added that he wanted to build social harmony through the chorus, a gathering of gentlemen’s energy.

“If regular alumni associations exist for networking and connections and people expect inappropriate favors through those associations, then we exist purely to sing,” said An Tae-sang, a member of the concert choir at Gyeongseong High School. “Through the sensibility of singing, we reach out to marginalized people and do volunteer work, like many other performers do.”

The members of those alumni choruses share a close bond, as much as regular alumni associations. However, the alumni chorus members don’t merely limit themselves to the association, they also reach out to current high school students as well.

The alumni chorus’s next goal will be to perform next year for the 70th anniversary of Liberation Day - and hopefully with even more members.