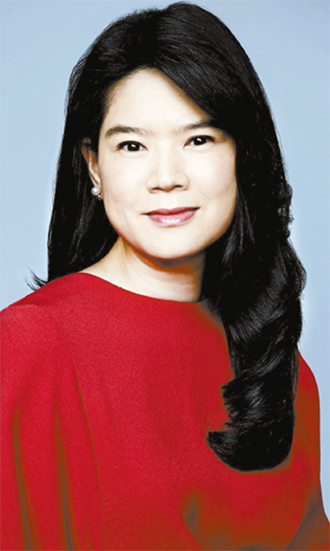 Korean-American Ellana Lee, 43, who was recently named the senior vice president and managing editor of CNN International, says she owes a large part of her professional success to her cultural values.

“As a Korean who was brought up in a Korean culture with Korean values, I would like to believe that this has played a big part not just in my personal life but also in my professional career,” Lee said following her promotion on Sept. 10, which marks the first time a CNN senior vice president has been based in Asia.

It also places her as CNN International’s most senior executive outside of the United States.

The JoongAng Ilbo recently conducted a written and telephone interview with Lee, who manages CNN’s editorial operations in the Asia-Pacific and develops its business activities worldwide from Hong Kong, CNN International’s regional headquarters.

CNN is viewed in 380 million households around the globe, including more than 53 million in the Asia-Pacific. Of CNN’s 42 editorial offices, Lee manages 10 located in the region, including one in Seoul.

Her new roles include expanding the network’s feature programming and spearheading CNN’s business objectives on a global scale.

And despite her promotion, she gets to stay in Asia.

“Normally, an international role like the one I’ve just been charged with is based in our global headquarters in Atlanta, in the U.S. or in London,” Lee said.

“This is a huge reflection of the growing importance of the Asia-Pacific region for CNN internationally and also reflects the tremendous opportunities we believe the region - which is home to half the world’s population - presents for CNN.”

Lee started her career as a CNN producer in 1997 in New York. By 2000, she decided it was time for a change of pace when her boss suggested she head to CNN International’s headquarters in Hong Kong.

At first, she thought of staying for a couple years, “but that turned into 14 years.”

Lee acknowledged that her background as a producer helps her in her current position.

“As a producer, you need to manage a team, which is really a microcosm of what I am doing now,” she said.

“There were just so many stories happening at once, and, as a producer, you have to have a clear vision on which are the most important stories to tell your audience. And adding to the pressure, you have to do this within a very limited time. … I learned many valuable lessons on how to motivate and lead a team in a highly pressurized environment.”

Such decision-makings skills were put to good use last November when she decided to dispatch CNN’s team to Tacloban to cover Typhoon Haiyan in the Philippines before the storm even hit, a move that gave them “advantage over all our competitors.”

“I still remember the day we made the decision to send a team into Tacloban in the Philippines. Based on initial information, we weren’t quite sure how big this storm would turn out to be,” Lee said. “It ended up being the right decision because it turned out to be the ‘typhoon of the century.’”

Lee received her bachelor’s degree in history and international relations at Georgetown University and obtained her master’s degree in broadcast journalism from New York University. She is also a graduate of Harvard University’s Global Leadership and Public Policy for the 21st Century Executive Program and was named a Young Global Leader by the World Economic Forum in 2007.

In regard to the Sewol ferry accident in April off Korea’s southern coast, Lee said, “Perhaps the biggest tragedy about the disaster was learning that lives could have been saved.

“We’ve covered a lot of heartbreaking stories and nothing tugs at your heart more than knowing a tragedy could have been prevented,” she said. “Of course, as a Korean, this tragedy was even more painful for me personally.”

However, she added that the most important principle of covering any sort of disaster was very simple: “We tell the story without bias.”

As to her success, Lee concluded, “You need to surround yourself with passionate and smart people and listen to what they have to say.”