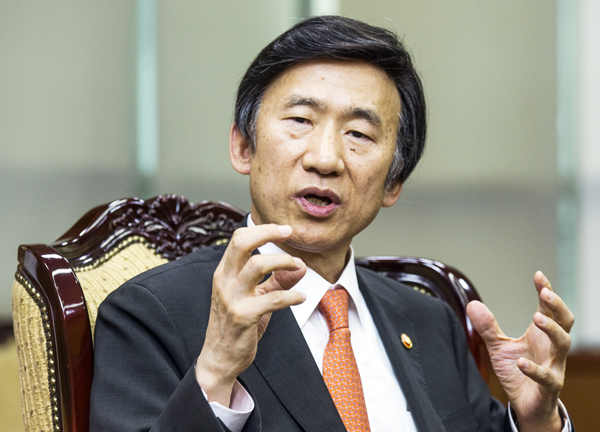 Foreign Minister Yun Byung-se sits down for an interview on Sept. 12 with Kim Young-hee, the JoongAng Ilbo’s editor at large, at the Ministry of Foreign Affairs in central Seoul. By Kim Seong-ryong

The resolve to improve relations between Korea and Japan is intensifying in both countries, according to Korea’s Foreign Minister Yun Byung-se.

“A lot of movement between both countries will be seen very soon,” he asserted during an exclusive interview on Sept. 12 with Kim Young-hee, the JoongAng Ilbo’s editor at large, at the Ministry of Foreign Affairs in central Seoul.

This is the first time Yun agreed to an interview with a news outlet since he took office last March. He sat for nearly two and a half hours with Kim, discussing more than 40 questions on diplomatic trends.

In particular, the minister took the time to deliberate over Korea-Japan relations, which continue to be strained because of historical and territorial issues.

The Korean and Japanese foreign ministers have met three times so far, Yun said, adding that there is “a high likelihood” that he will meet again with his counterpart, Fumio Kishida, before the end of the year.

Next year marks the 50th anniversary of the normalization of ties between the two countries, and the minister acknowledged that using a diplomatic approach to counter the Shinzo Abe administration’s historically revisionist course was “not easy.”

“However, the Park Geun-hye administration has a goal to establish stable and irreversible Korea-Japan relations,” he said.

But he had sterner words for some Japanese politicians’ retrograde views on history.

“In the past 20 years, in the earlier years, Korea signaled goodwill gestures to Japan, but toward the end, the situation has just become exacerbated, so we do not want to repeat such measures, having learned from trial and error.

“We have a definite strategy and road map for what we want [in establishing a stable relationship],” he said. “Rather than doing what Japan wants when they want it, please watch patiently.”

When asked if his stance toward Japan is not sometimes too rigid, he added, “Our government has adhered to a clear position on historical issues, but besides that, we hold a balanced position of not linking tensions due to history with other aspects, like bolstering security and economic cooperation, as well as civilian exchanges.

“And President Park Geun-hye has also indicated that next year should be a new beginning in Korea-Japan relations.”

Yun also expanded on the ongoing talks between Seoul and Tokyo over resolving the issue of the Japanese military’s sexual enslavement of Korean women during World War II and the country’s colonial rule of the peninsula.

The issue itself has become a human rights talking point in recent years.

“[The discussions] will become the first trigger in helping [ties between Korea and Japan] evolve to the next phase,” he said.

In a meeting in Seoul earlier this month with the vice ministers of Korea, Japan and China, the three sides agreed that a trilateral foreign ministers’ meeting should be held soon.

Yun admitted it was “premature” to talk about a bilateral leaders’ summit between Korea and Japan, or a meeting that would include China, along the sidelines of the Asia-Pacific Economic Cooperation (APEC) summit in November.

“In order for that to happen, a foreign ministers’ summit between the three countries has to happen first. … However, we have never shut off the possibility of a summit between Korea and Japan’s leaders.”

“The advantage of multilateral talks,” he added, “is that it serves as a catalyst in a situation in which the [two countries] don’t want to hold bilateral talks because they don’t want to engage in uncomfortable talks. If Korea, Japan and China meet, it may not always be productive, but it can lead to trust-building, so it can be a good thing.”

When asked if Korea had recently begun to shift toward China, Yun responded: “In a situation in which progress is not being made between Korea and Japan, the Korea-China relationship has progressed, and that aspect has become magnified. If the word ‘shifted’ has to be used, it is more accurate to say that China has shifted more toward South Korea than North Korea when it comes to the peninsula.”

The rare diplomatic moves recently by Kang Sok-ju, the secretary of the Central Committee of North Korea’s Workers’ Party, and North Korean Foreign Minister Ri Su-yong, “shows an urgency in North Korea and is a reflection of just how much it is isolated from the international community.”

Yun added that he had received calls from the foreign ministers in the countries Ri had visited, and that their main conversational focus included requests for economic cooperation, the nuclear issue and the human rights issue.

“So, North Korea cannot be effective without South Korea,” he said.

When asked if the government should not take a more active approach in handling issues related to North Korea, Yun responded, “We have proposed high-level talks between the North and South, and we are always open to the possibility of dialogue.

“The projects with North Korea proposed by the president in her Dresden Declaration on March 28 and her Aug. 15 Liberation Day address are feasible projects that could be helpful to the North Korean people, so it is not right for North Korea to call this an attempt at unification by absorption and then reject it.”

Yun, a known workaholic, is a career diplomat who passed the diplomatic service exam in 1976. He is a graduate of the Seoul National University College of Law and received his master’s degree from Johns Hopkins University’s School of Advanced International Studies in the United States.