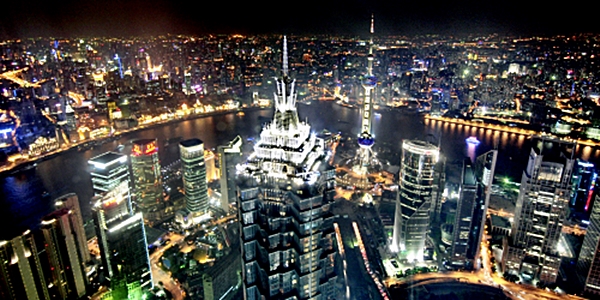 A view from the World Finance Center in Shanghai. Despite remarkable economic success, China still has a “severely under-capitalized financial system.” [JoongAng Ilbo]

Let’s dispense with the suspense: Yes, China very likely will. And the outcome will have far more serious global implications than Krugman’s main worry, which focuses on the chances of stagnation in Europe.

China’s “severely under-capitalized financial system,” “imbalanced growth” and chronic “overcapacity” all remind Merrill Lynch analysts Naoki Kamiyama and David Cui of Japan in 1992, when its bubble troubles first began to paralyze the economy. China is even more reliant on exports than Japan was in the 1990s, and its all-important property market now “may be tipping over.”

Most worrying is the shaky banking sector. What concerns Kamiyama and Cui is the lack of bold action in Beijing at a time when the scale of Chinese bad debt may be higher than Japan’s ever was; they believe nonperforming loan ratios are “significantly into double-digit” territory. In the first half of this year, the analysts estimate, commercial banks had to book larger nonperforming loan liabilities than for all of 2013. Mind you, this comes even as the government claims financial imbalances are being addressed. As recently as July, total social financing, a proxy for debt, was still growing by almost 16 percent year-over-year, a rate well above China’s nominal GDP growth. In other words, China has spent much of this year adding to its debt and credit bubbles - not curbing them.

If this were 1992, China could simply force state-owned banks and enterprises to rein in excesses and ride out the resulting modest hit to gross domestic product. But China passed the point of no return after the crash of Lehman Brothers in 2008, when it unleashed a $652 billion stimulus package, followed by untold smaller ones since. The moves put China, in the words of New York hedge-fund manager James Chanos, on a “treadmill to hell.” If Beijing were to attempt a broad credit shakeout now, virtually every sector of the economy would suffer. The risks of social unrest would soar.

China may soon face the dilemma Japan did in 1997, when 100-year-old Yamaichi Securities collapsed and threatened to turn the Asian financial crisis into a global meltdown. Rather than come clean about the true magnitude of its bad-loan problem, Japan raced to prop up its banking system with bailouts and interest-rate cuts. Leaders in Tokyo feared the country would lose face if counterparts in Washington, London and Brussels knew how close Japan Inc. was to insolvency. But the Japanese response - which included untold numbers of state-funded cash injections and the propping up of weak banks by healthier ones - shoved the country into the infamous “lost decades” from which Prime Minister Shinzo Abe is now pledging to extricate the nation.

The popular tonic is that China has $4 trillion of currency reserves to toss at its bad-loan problem. Yet any move to turn China’s U.S. Treasuries, European debt and Japanese bonds into cash could precipitate a global rout. A Chinese crash would hammer commodities markets, industries from manufacturing to high tech, and the sovereign and corporate credit ratings of export-reliant economies from Australia to Japan to Brazil. It would be an untimely blow to the United States and an increasingly fragile Europe.

China should instead allow deleveraging to begin immediately. While the government has allowed some small debt defaults, including Shanghai Chaori Solar Energy Science & Technology in March, it has yet to permit a big one that would chasten lenders. It’s going to have to stomach some bigger defaults that may include a local government or two. Leaders need to direct the central bank to drain credit and clamp down on the shadow-banking monster that’s grown exponentially since 2008.

Alas, China shows no signs of engineering such a purge. As Japan proves even today, healthy growth depends on a functioning and stable banking system. The longer China waits to create one, the more it courts the kind of lost decade the world economy can scarcely afford.