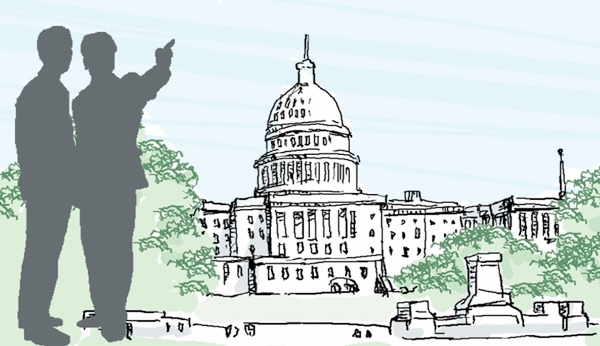 Japan has launched a fierce lobbying campaign to overcome the issue of its wartime sexual slavery, but it won’t be easy. The issue of the so-called comfort women is no longer a bilateral matter between Korea and Japan. It is now treated in the international community as an issue of human rights violations and it is being addressed not only among politicians in Washington but also at the United Nations Human Rights Council in Geneva, Switzerland.

It is not a surprise that Japan has to step up its lobbying. A source well-informed about U.S. politics said about three influential Japanese statesmen visit Washington every month to address the situation.

An intriguing article was published on Sept. 6 in the New York Times. It was about renowned think tanks including the Brookings Institute and the Centre for Strategic and International Studies. Over the past four years, the think tanks received $24 million or more from foreign governments to issue research reports to please the clients, the newspaper exposed. The New York Times reported that the institutes also arranged meetings with White House and State Department officials for their clients.

What actually caught my eye was a reference attached to the article. It was the detailed amounts that the Brookings Institute received from each country, and the data showed how hard the countries work to influence the political community in Washington. According to the data, the institute received $310,000 from the Japanese Embassy in the United States and Japan Air Self Defense Force. For Korea, the Foreign Ministry and Korea International Cooperation Agency together paid $260,000. Taking into account the fact that Japan’s gross domestic product is about 4.5 times higher than that of Korea, what Korea paid appeared to be surprisingly high.

It is, however, wrong to think that Korea’s influence would have to be stronger, because Japan’s true strength lies in another area. The Japanese government, since the 1970s, has hired top lobbyists to influence the U.S. political community. Many informed sources in Washington said Japan is directing its fiercest lobbying activities toward the White House, Congress and the State Department this year.

It’s not a surprise if you consider the remarks and behavior of Japanese Prime Minister Shinzo Abe, which clearly need follow-up spin abroad. When the U.S. Congress adopted a resolution to condemn Japan’s wartime sexual slavery in 2007, Japan’s leader was Abe. The U.S. politicians timed the passage of the resolution with Abe’s visit to the United States.

For Abe, who places high priority on Japan-U.S. relations, the resolution must have been an unforgettable insult. “Japan is back,” he said during his first visit to Washington after becoming the prime minister for the second time.

The United States has the Foreign Agents Registration Act and publicizes detailed activities of lobbying companies and the commissions they received in return for working for foreign governments. According to the law, 41 firms are working for the Japanese government, while only 24 are hired by Korea. And Japan pays far larger amounts in commissions for a greater scope of activities than Korea.

For example, the state of Virginia recently said it will use both the Sea of Japan and the East Sea in its documents and on its maps, and the Japanese Embassy hired a lobbying firm, McGuireWoods LLP, and paid it $25,000.

On the issue of the comfort women, the Japanese government spent even more. Tokyo paid two law firms $523,000 and $195,000. The two companies reportedly conducted surveys of U.S. lawmakers and associations of Korean residents in the United States and briefed Japan about them.

That’s just the tip of the iceberg. Japan’s true influence on Washington comes from the Japanese companies that enthusiastically promote Japan’s policy.

A symbolic case is the cherry blossom festival in Washington D.C. Tourists flock to the capital to look at the cherry blossoms on trees contributed by a Tokyo mayor in 1912. Various events to promote Japan take place in time with the festival. Japanese companies pay the expenses.

The shadows of Japanese companies are also cast over the comfort women issue. Korean residents’ associations in the United States believe that Japanese residents were able to come up with litigation expenses extremely fast to demand the removal of a statue commemorating the comfort women because of the support of the Japanese business community.

Let’s think about what Korean companies did. Conglomerates such as Samsung, Hyundai Motor Group and LG deserve to play a role in public diplomacy to promote Korea as a brand. And yet, they actually put more efforts into hiding their identities as Korean companies.

Korea’s financial support for think tanks in Washington was probably about one percent of Japan’s since its government, public foundations and companies all work together to finance them.

A national brand is directly linked to the images of the products produced in a country. From a long-term perspective, improving a national brand and the country’s prestige is a sure way to heighten a company’s competitiveness.

It makes me wonder why it is so hard for Korean conglomerates to find an attractive place to spend their mounting internal reserves.

* The author is a senior writer on international affairs at JoongAng Ilbo.