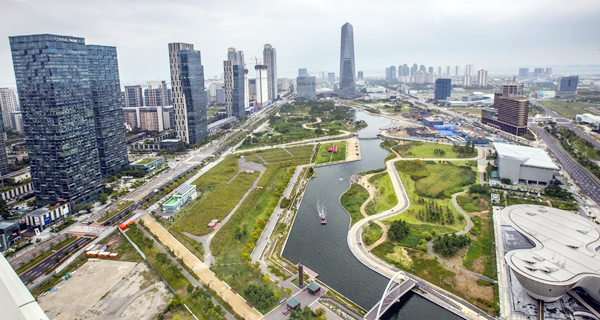 A view of the Songdo international business district, including the 33-story G-Tower, which was created on reclaimed land along Incheon’s waterfront, 65 kilometers southwest of Seoul. By Park Sang-moon

Javier Manzanares, chief financial officer of the Green Climate Fund (GCF) Secretariat based in Songdo, the ambitious international business district of Incheon, walks his 10-year-old daughter to school every morning before he goes to work.

But in the afternoon, she walks home all on her own. And her parents never worry.

“Do you know how important it is for a parent to be reassured about the fact that it’s safe enough to let children walk home alone?” asked Manzanares.

The Spanish senior executive of the GCF, the first multinational organization to choose Korea as its home base, relocated from Argentina to Songdo two months ago. He didn’t hesitate to bring his wife and two daughters, thanks to the good reputation Songdo has as a healthy and safe environment to live and raise kids.

After a decade of development, Songdo is finally becoming the international city it was designed to be. Even until last year, there was skepticism about the 53-squre-kilometer city’s slower-than-expected development. The opening of the GCF Secretariat has helped. So too has the opening of international schools and university campuses.

“Even before coming to Songdo, I got sufficient information about the new city, and I was so excited to come,” Manzanares said. “There are a few ‘smart’ cities in the world, but Songdo is on top.”

It’s pretty common for staff of such international organizations as the GCF to pack up every three or four years and move to a different place. For them, Songdo has risen as a preferred destination.

With about 12 more foreign staff members expected to arrive in Songdo this year, the GCF Secretariat is preparing more relocation services for incoming officials. The Incheon City Government is also cooperating with the secretariat to help make Songdo a better place for its foreign residents.

In the middle of the city, offices of 13 international organizations, including the GCF, have opened in the 33-story G-Tower. About 80 foreigners work in the building.

The total number of foreign residents in Songdo was around 1,500 as of June, according to the Incheon Free Economic Zone (IFEZ) Authority. That figure rose from about 1,100 last year.

Once the foreigners arrive in Songdo, they stay temporarily in serviced apartments. They can spend weeks or even months there until they find apartments. Three real estate agencies with agents who speak English help the new foreign residents.

“The agents explained the Korean housing payment system well, so there was not much difficulty,” Manzanares said.

As for medical services, he is pretty satisfied, too. He has been to Gachon University Gil Hospital located in the southeastern part of Incheon, about 30 minutes from his house. There are 14 general hospitals that have English-speaking doctors, including Inha University Hospital’s International Clinic - located close to Incheon International Airport and Songdo.

More than anything, Manzanares is happy about the school his daughter goes to. Chadwick International, which opened in 2010, is getting raves from foreigners who have relocated with kids.

“We are very pleased about the quality of the school facilities,” he said. 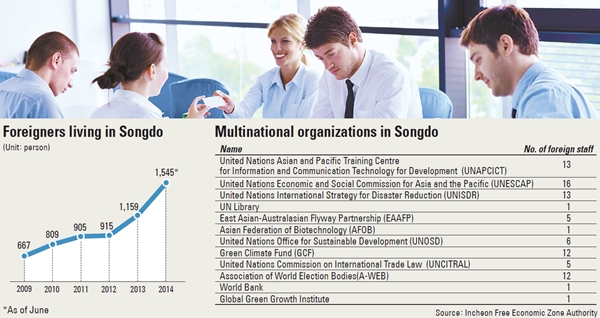 Even Korean parents living in Daechi-dong, southern Seoul, known as the mecca of private tuitions, are considering moving to Songdo with their kids because of the schools.

The city government is making special efforts to enhance security in the city.

In 2011, the city adopted an intelligent context-aware surveillance system. Closed-circuit televisions that can recognize criminals’ vehicles are installed at two bridges which one must pass over to get in or out of the city. Once the CCTVs recognize them, the police immediately move in.

Although conditions are improving in the city, there are still complaints about inconvenience in using public transportation and insufficient English-language services.

“It is hard to communicate with local people at restaurants, and even harder with taxi drivers,” said an Australian official at one of the international organizations who declined to be named. “I have to call one of my Korean friends to speak to drivers for me, which is really inconvenient.”

Some complain about a shortage of buses and grumpy taxi drivers.

“Because the buses are few, I mostly take cabs, but what is very annoying is some drivers seem upset when foreigners get in,” said Stephan Moore, who teaches English at a local school.

As the number of foreigners moving to Songdo rises, the IFEZ is trying to provide more foreigner-friendly services. It currently runs a Global Center on the first floor of the G-Tower, where foreigners can get free Korean language lessons and request information about housing, hospitals, schools, restaurants and transportation.

“We are willing to help any foreigners who visit our center,” said Kim Hee-kyung, head of the center. “From this year, we plan to publicize our center more actively and arrange various events for them.”

“A way of monitoring the growth of the city and the incremental percentage of foreigners is needed,” Manzanares said. “There needs to be more options for foreigners in services like transportation, medicine and hotlines, because foreigners’ demand for those everyday services is increasing.”