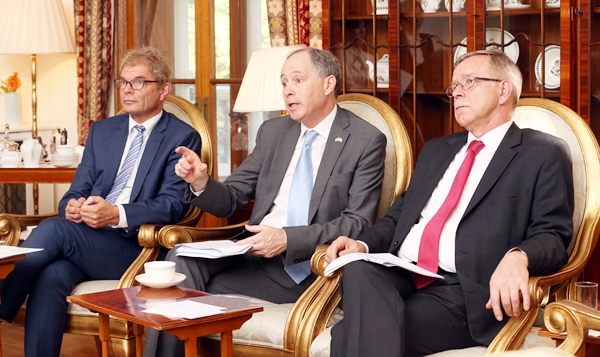 The upcoming United Nations Climate Summit in New York will serve as a “political impetus” for global climate change, top envoys to Seoul from the European Union, Germany and the United Kingdom said.

Some 100 world leaders are expected to attend the global gathering on Sept. 23.

“This conference will serve as a political impetus and give political momentum?...?to reconfirm politically with all countries in the world to continue negotiations and come up with legally binding commitments which will be a part of the final agreement in Paris [in 2015],” said Ambassador Tomasz Kozlowski, the EU Head of Delegation.

The climate summit, to be presided over by UN Secretary General Ban Ki-moon, will mark the first time that world leaders have gathered to discuss the issue since the 2009 conference in Copenhagen. It will serve as a lead-up to an agreement that will be ratified in Paris next year.

“That’s why this initiative is really great, because leaders, not officials, are going to commit,” the EU ambassador added.

Ahead of the summit, the Korea JoongAng Daily and the JoongAng Sunday conducted a joint interview on climate change with Kozlowski, German Ambassador Rolf Mafael and British Ambassador Scott Wightman at the British ambassador’s residence in central Seoul on Thursday.

They pointed out that the summit would serve as an opportunity for EU leaders to reconfirm their commitments, including cutting 40 percent from domestic gas greenhouse emissions by 2030, [compared to levels in 1990].

“It is about raising awareness for the importance of the climate change issue, since we are too much busy with immediate day-to-day crisis management issues, while the medium- and longer-term challenge is on the back bench,” Mafael added.

“And it is important to make it clear once more that the present pressures for greenhouse gas reductions are not sufficient in order to meet our objective to keep global warming below 2 degrees Celsius.”

The three ambassadors also made it clear that the international community has high expectations for Korea to take a leading role in the global climate change issue, especially as the nation now houses the headquarters of the secretariat of Green Climate Fund (GCF), which is often called the environmental World Bank.

“We feel that Korea will play a very important role as a country [that] has moved from a developing to an industrialized country and as a country which can bridge the gap between the two words, and which has ambitious targets already,” said Mafael.

Korea was categorized as a “developing country” under the United Nations Framework Convention on Climate Change (UNFCCC), adopted in 1992, but Kozlowski pointed out that “Korea is [now] a well-developed country with a lot of capabilities. That’s why we expect Korea to take a leading role in mobilizing other countries to reach an agreement which will be binding to all countries.”

The ambassadors also emphasized that the new agreement should be legally binding for all countries, whether they are developing or developed.

“In terms of engaging developing nations,” Mafael said, “the real key issues are to actually convince them that to adopt a green growth model does not mean a negative economic impact, but rather to show that reducing carbon emissions will not negatively impact long-term prosperity, but that green growth will entail innovation, job creation and a sustainable future.”

The ambassadors also encouraged Korea to continue to pursue implementing the emission trading scheme and other green growth initiatives.

“Korea is the first Asian country which adopted the emissions trading system that is very similar to the European system [which will enter into force Jan. 1, 2015],” said Kozlowski.

“I think it’s worth noting that there’s been quite a lot of resistance from industry in Korea and big business towards some of the government’s stated goals in terms of reducing carbon emissions,” UK Ambassador Wightman pointed out.

“So we were disappointed that the introduction of the low-carbon vehicle policy is being postponed to 2020 because it is precisely through these sorts of measures that Korea can help to deliver on its commitment to reduce emissions by 30 percent.”

Kozlowski admitted that due to the global financial crisis, the climate change issue has been set aside. But he had ominous words to warn of the consequences of continuing to avoid tackling the problem.