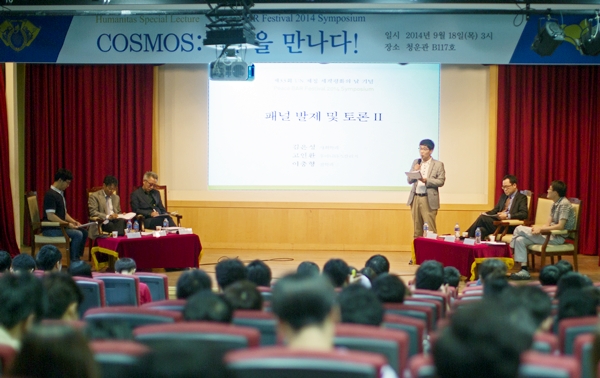 Intellectuals from all around the world are coming to Kyung Hee University to discuss the history of our world and the future of mankind at the Peace BAR Festival 2014 (PBF 2014), an annual conference where scholars talk about issues pertaining to world peace. This is the 33rd year the university has hosted this event.

Choue Young-seek, the founder of Kyung Hee University, suggested holding the festival during a meeting of the International Association of University Presidents in order to celebrate UN’s International Day of Peace, which was created in 1981.

This year’s conference will run from Sept. 21 to 26. It will consist of symposiums, roundtables and Kyung Hee’s own peace forum to share thoughts on “Cosmic Humanity and Public Practice,” the main theme of this year’s event. The questions of where we come from, where we are and where we will go will be the backbone of the talks.

Last Thursday, the PBF 2014 Symposium held a discourse on the meaning of Big History in social science, natural science and art after the audience watched “Cosmos: A Spacetime Odyssey,” a sequel to Carl Sagan’s “Cosmos: A Personal Voyage,” a TV documentary on the perspective of humanity in the universe. The discussion centered on the paradigm of higher education and the future of universities.

The university also hosted an open astronomical observation yesterday where participants were able to view outer space. Guests had the opportunity to see CINEMA, the first miniaturized satellite to study weather in space co-produced by Kyung Hee University, the University of California at Berkeley and the Imperial College London.

The main events, the opening ceremony and roundtable, are scheduled for today. Hilton Anthony Dennis, South Africa’s ambassador to Korea, and Lee Ho-jin, the vice president and CEO of United Nations Association of the Republic of Korea, will attend the opening event and deliver congratulatory messages.

The roundtable on “Cosmic Humanity and Public Practice” will also be attended by many renowned personnel from outside the school, such as Prof. Doh Jung-il, the rector of Humanitas College, who will be the chair of the panel. The panel will include Kang Kum-sil, a former justice minister, Prof. Kim Dae-sik of KAIST, Lee Dong-wook, a director of the Kyung Hee University System, and Prof. Han Hyung-jo from the Academy of Korean Studies.

The panelists from the school include Prof. Lee Mun-jae and Kim Min-wung from Humanitas College, Prof. Jeong Yong-seok from the department of biology, and Prof. Kim Seong-su from the School of Space Research.

From Thursday to Friday, students attending the UNAI ASPIRE Kyung Hee Peace Forum will produce a message to send to the UN secretary general to urge the UN to have a new approach on the peace matter and their resolution to take part in peace issues.

The committee to organize PBF said that this year’s theme was chosen in the hopes of forging a brand-new Big History for the future of mankind.

“We expect that this year’s forum will open a new phase in Big History,” said a committee official.