Playing her part in a male-dominated industry

Playing her part in a male-dominated industry 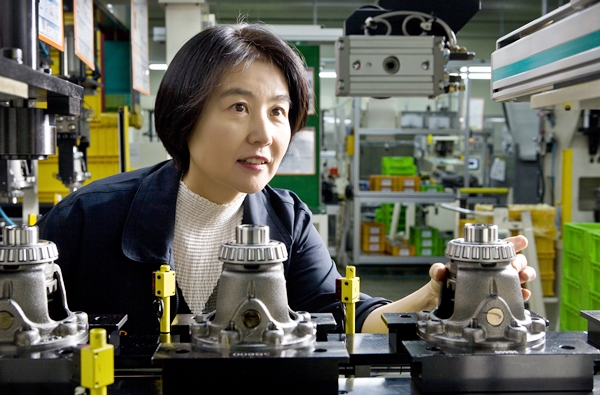 A growing number of women have recently entered the traditionally male-dominated field of auto parts manufacturing. But when the focus is narrowed to the top post, the presence of women is still scarce.

Auto parts manufacturing might seem a highly unlikely field for a female CEO, especially in Korea, where women represent a miniscule 1.9 percent of board directors, according to GMI Ratings. But Kim Sun-hyun, CEO of OTO, is one of the rare female forces at the helm of a car parts manufacturer, and she has turned the once bankrupt company into a leading supplier, generating a sales increase of 300 percent between 2009 and 2013.

OTO is a tier one supplier to Hyundai Motor and Kia Motors, manufacturing transmission parts and different types of gears. Topping the supply chain, tier one companies sell key components directly to a buyer while tier two companies provide parts to the first tier.

The major supplier’s beginnings, however, were rather humble.

At the peak of the Asian financial crisis in 1998, a number of auto parts makers went bankrupt. At the time, Hyundai Motor played a critical role in connecting bankrupt companies with potential new owners.

A friend of Kim’s father who had connections at Hyundai asked if she was interested in buying the bankrupt, indebted company.

Since Kim, then 39, was looking for a new opportunity, she accepted.

“I worked at foreign banks for more than 10 years and then moved to a trading company,” Kim said, “But, by that time, I wanted to do something new where I could maximize my potential.”

Prior to becoming a CEO, she worked for the Seoul branch of Morgan Guaranty Trust (now J.P. Morgan) and the Australian bank Westpac after graduating from Sungshin Women’s University with a bachelor’s degree in chemistry. After a 12-year stint at foreign banks, she moved to a trading company in 1995 that exported textile machinery to China. There, her interest in machinery grew, especially concerning the improvement of product quality by assembly line enhancement.

“By the time I worked for the trading company, I was really interested in machines and parts and how they worked,” she said. “And running a business also sounded like a good idea to fulfill my potential in a more dynamic environment.”

Kim makes the decision sound easy, but she was betting big. A large amount of her savings and retirement payments, which she received when the Australia bank closed its office in Seoul, went into OTO.

In its first year under Kim’s leadership, OTO’s sales were 4 billion won ($3.84 million) and its operating profit stood at 100 million won.

“I would not say that is a small amount of money, but from a business perspective, things were really hard because not much money was left after paying the 60 workers,” the 55-year-old Kim said. “With the profit, we couldn’t plan for another investment as part of a long-term strategy.”

Now, the company has three factories including its Gyeongju unit, one in Yesan, South Chungcheong, and another in Dong Nai Province in Vietnam. It employs a total of 623 regular and temporary workers.

But modest profits in the first year were not Kim’s sole concern. She also had trouble dealing with the mostly male work force.

“I was a relatively young female CEO. In the first few months, I felt that some of workers didn’t take what I said seriously,” she said.

Instead of insisting on her legitimacy, she came up with a different approach.

“I thought that employees would respect my decisions and words once I proved that I was really serious about the post I held, and that I was an efficient leader who can turn this company around.

“Genuine respect and trust is not something I could earn by just commanding it,” she said. “I began studying more seriously about the industry and parts. I was the first one who arrived at the office and the last to leave.”

Kim said that after about half a year, her difficulties with male workers had significantly reduced. 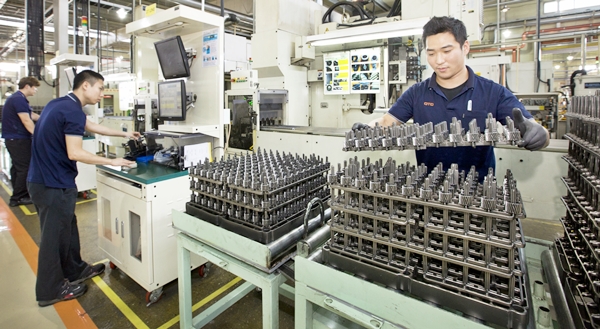 Workers at OTO’s Yesan factory focus on their work before the parts go to the assembly line. By Park Sang-moon

The key to successful manufacturing, she said, lies in the commitment to provide quality products by streamlining assembly lines and strengthening the quality control system. However, the fundamental task of a CEO is to build a trust-based relationship with workers, she added.

“Every parts company has a quality assurance system as well as sophisticated machinery,” Kim said. “But the real difference among companies comes from the people who do the job.

“If they have faith in their company, they will double-check and concentrate more on producing the best possible components.”

Kim enhances employees’ morale by holding regular meetings with them. The meetings, which take place at least once every two months, are designed to exchange opinions with executives.

She said that the workers are encouraged to say anything they want about the company.

“There have been a number of cases in which things are improved through corrective measures based on the results of the meeting,” Kim said.

“We always post what we discussed at the meeting on the internal network and bulletin boards in the office so that we can check how things progress,” she said.

However, the financial crisis in 2007-08 tested Kim’s leadership.

“That time was the hardest since I started running OTO,” she recalled. “In the years 2007 and 2008, we planned to build two additional factories in Yesan and Vietnam. The opening date of the Vietnam assembly line exactly coincided with the day that Lehman Brothers collapsed.”

But the CEO proceeded with her plan, believing that the expansion was necessary.

Ironically, the difficulties also reassured Kim that the company could make it through.

“In the wake of the recession, we were forced to close the Vietnam factory for three months,” Kim said.

While she struggled to make ends meet and acquire dried-up funds, workers voluntarily froze their salaries and returned bonuses.

“I felt really sorry, and, at the same time, I was really moved. That is when I made up my mind to try harder to make the company stronger and get back on track.”

When asked if there was a moment when her commitment to the company wavered, she said yes.

“I was approached by an IT company that looked really promising and had a sound business track record, and they offered a really good salary,” she said, “And, you know, an IT job in Seoul looked more glamorous than the auto parts industry.

“But when I came back from an interview session in Seoul and arrived at Gyeongju, looking at the employees who worked hard all day long and welcomed me back, I changed my mind.

“I think I will stick around in this job because I really like to work with the workers and make progress with them.” 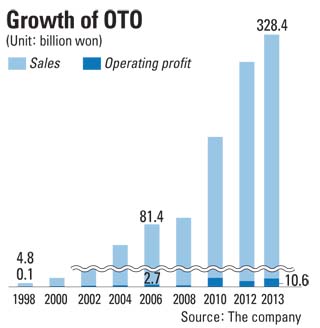 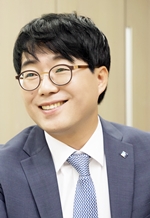 The automotive equipment company stands out in various aspects, though it needs to overcome its over-reliance on Hyundai Motor, its major business partner, in order to hedge risk.

What distinguishes OTO from its peer companies is its commitment to supply quality products to its client companies - Hyundai Motor and Kia Motors.

Since it was established in 1998, OTO has maintained business ties with leading automakers, receiving high ratings from those companies.

The major motor companies score their suppliers, and OTO has received 4.5 out of a possible five points. This proves that its clients are satisfied with the components that the parts company produces. The pursuit of high-quality goods has been the driving force behind OTO’s sales, which increased by 300 percent over the past five years.

OTO’s growth is also the result of a conciliatory labor-management approach taken by its CEO. Small- and medium-size companies often face trouble with their labor unions. Conflict between companies and unionized workers can hurt a company’s image and also affect sales.

However, OTO hasn’t had a major labor issue since its inception. This is because the CEO regularly holds a committee meeting where the leaders of each division gather to talk about anything they want to regarding work. The repeated discussions have led to deeper understanding and trust between labor and management. The parts company emphasizes the notion of “autonomous management” to its workers, encouraging them to think of the company as belonging to them and not to the CEO so that they can be more engaged.

Last but not least, it is worth noting that the company has tried to be socially responsible by hiring 10 percent of its work force from within its region.

OTO is also involved in charity activities for orphanages and welfare centers and encourages its workers to volunteer.

Despite its numerous advantages, there is still room for improvement at OTO. The vast majority of its sales comes from contracts with Hyundai and Kia. The company needs to diversify its portfolio to make the company more resilient.

To that end, the parts manufacturer should hire more employees for its division that manages overseas projects. Also, it should increase spending in research and development to increase its standards.