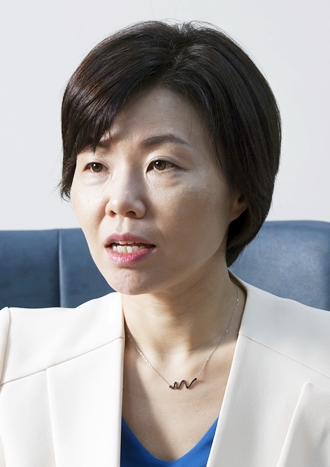 For rookie lawmakers, the ongoing political impasse over the terms of the special Sewol law has left them confused and bewildered, according to Saenuri Rep. Min Hyun-joo.

The wrangling has virtually suspended all parliamentary activities, with the main opposition New Politics Alliance for Democracy refusing to pass any legislation until the ruling party gives in to its demands on the bill.

“I just came back from a meeting with fellow first- and second-term Saenuri lawmakers to seek a way out of this political stalemate,” Min, who served as a spokeswoman for the ruling party until last month, said Monday in an interview with the Korea JoongAng Daily in her National Assembly office.

“As a first-term lawmaker, I’ve been pondering what I can do to untangle this gridlock. And so far there is no sign of breakthrough,” said the 45-year-old, who was elected to the Assembly as a proportional lawmaker in the 2012 general election.

Min attributed the stalemate to the NPAD’s lack of leadership in persuading the families who lost their children in the April 16 ferry sinking to accept two bipartisan deals it had previously reached with the Saenuri.

“The ruling party is ready to return to the negotiating table. But the negotiation for the terms of the law must be within the boundaries of legal principles,” she said, referring to the ruling party’s refusal to accept the relatives’ demand to empower a fact-finding committee with the authority to investigate and indict suspects.

“Another issue is that the NPAD must apologize to the people for backpedaling on two compromises it reached with the Saenuri. The NPAD walking away from those bipartisan deals amounts to a breach in political principles, and yet, it has not apologized so far.”

Wrangling over the Sewol law has continued even though the two sides reached compromises twice in August, both of which the NPAD reneged on following fierce protests from the Sewol victims’ families.

The center of the dispute lies in whether to empower a fact-finding committee to be established under the special Sewol law with the authority to investigate and indict those deemed accountable for the disaster, which claimed the lives of more than 300 passengers, mostly 11th-grade high school students on a class trip to Jeju Island. By law, only the prosecution has the authority to indict suspects.

Min, who formerly worked as a senior researcher at the state-run Korean Women’s Development Institute, first caught the attention of the media when she started as a Saenuri spokeswoman at the inception of the Park Geun-hye administration. She held that position until last month.

“Serving as a spokeswoman is like standing on the frontline [of a battle]. It gives you opportunities to understand public sentiment first-hand from the press and learn how to respond to public demand,” Min said.

But she also warned of the potential perils of the job, such as relaying information that could contrast with the party’s platform.

“To be the go-to person for the press places you under the media spotlight, which can work to raise your profile. But it can be a double-edged sword. What matters is not how well-known you are to the public, but how you are known by the public as a political figure,” she said.

Min remains the longest-serving party spokeswoman so far under the Park Geun-hye administration.

She mentioned that the issues she felt most confident about when it came to representing the party were North Korea-related matters.

“I was very aware of the Saenuri’s steadfast position on North Korean policies, which is not swayed by public sentiment. The party’s firm position on the issue enabled me to respond minute by minute.”

Min, who earned her doctorate from Cornell University in economic sociology, first entered politics in 2012 as a proportional representative. She was also a key member of President Park’s campaign team later that year, focusing on creating policy pledges tailored to working mothers, such as reduced working hours for pregnant women.

For younger-generation women struggling to break down barriers in the work place while also raising a family, Min - who herself is the mother of an 8-year-old son - said it is imperative that they never give up on their career.

“For unmarried women, it usually takes five years to tie the knot after they land a job. Many of these women about to marry are in their late 20s and early 30s, and many of them think about quitting their jobs to take a break for marriage. And what often happens next is they have no choice but to stay home because it becomes much harder to find jobs afterward [in their late 30s or early 40s],” she emphasized.

“I often tell young women to endure as much as they can and invest in themselves. Some give up, saying luck didn’t come along. But it’s only for those who have prepared themselves that luck finds its way to them.”