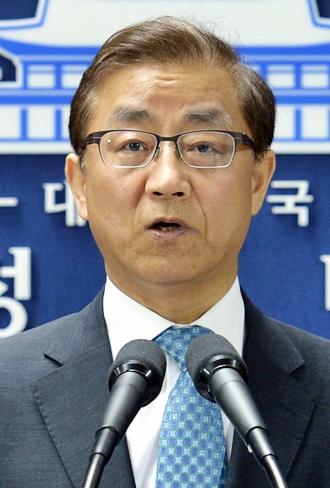 Blue House watchers are wondering why the senior presidential secretary for education and culture abruptly tendered his resignation Saturday just three months after his appointment by President Park Geun-hye, who accepted the resignation right away.

Though Song Kwang-yong, former president of Seoul National University of Education (SNUE), says he wanted to quit, Park’s quick acceptance of the resignation right before she departed for Canada Saturday lead many to think the former education professor was pressured to leave the job he was appointed to on June 23.

None of the Blue House staffers accompanying the president to Canada has explained the reason for Song’s sudden departure.

Blue House sources in Seoul say Song wants to go back to teaching.

“I can only say it’s not related to his work, but is about a personal matter,” said one Blue House official who spoke on the condition of anonymity.

The fact that Song expressed his desire to do well in his job at the Blue House last Tuesday during a meeting with reporters has made many wonder about his sudden change of mind.

Song, a former middle school teacher who later headed SNUE, served as a director of the Chungsoo Scholarship Foundation for 13 years until early last year. President Park has chaired the foundation.

One rumor about his departure is that he had violated laws during his time at SNUE, which could cause problems if the Blue House is accused of failing to investigate his past thoroughly.

The Park administration has suffered from a string of failed personnel appointments, including two failed nominations for prime minister.

“As far as I know, I understand that Song concluded it would be better to him to respond to some allegation after he returned to the school [instead of facing it as a presidential secretary],” said one government official.

When he was appointed in June, Song was accused of plagiarizing from one of his own students, a charge he denied.

Some say the president was disappointed in Song’s performance at the Blue House, citing a court ruling Friday that restored the legal status for the liberal Korean Teachers and Education Workers’ Union.

Since Song’s resignation was reported Saturday, the former professor has gone into seclusion with his phone shut off.