Kim charges on with judo gold

Kim charges on with judo gold 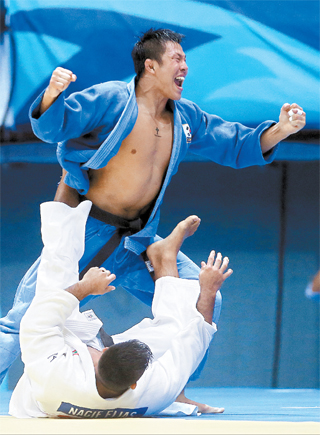 Kim Jae-bum celebrates after winning the men’s under 81 kilogram judo event to defend his Asian Games title on Sunday at Dowon Gymnasium. By Kim Seong-ryong

INCHEON - Kim Jae-bum knew what the nation expected of him on Sunday, as he is one of few judokas in the world who has accomplished a grand slam: winning the Asian championships, Asian Games, world championships and Olympics.

Most judo-watchers inside and outside the country considered the 30-year-old veteran the top contender in the men’s 81 kilogram (178 pound) event and since Korea struggled on Saturday with only three bronze medals, expectations were higher than ever for Kim to bring in golden news.

Kim said he felt huge pressure, not only from high expectations, but also because he wasn’t 100 percent physically fit ahead of the final against Elias Nacif of Lebanon on Sunday evening.

“One of my finger bones got injured during the tournament,” Kim said. “But there was no time to waste over such a minor issue because I’m at Incheon for a victory for myself and for the country. It was one of the toughest tournaments for me because I had to deal with strong opponents such as North Korea [quarterfinals] and Japan [semifinals].”

Fans didn’t know Kim was injured as he was more aggressive than his Lebanese competitor, who focused on defense during the final, which caused him to lose to Kim by shido, a penalty given when a player doesn’t attack.

By winning the event, Kim became the first Korean judoka who has won back-to-back titles at the Asian Games and accomplished a grand slam.

“I’m extremely happy for the achievement,” Kim said. “I want to present this gold medal to my wife and baby daughter who will turn 1 soon.”

When Kim completed the grand slam by becoming champion of the 2012 London Olympics, people thought he might retire because of his success in nearly every event possible. But Kim said his time isn’t up yet.

“Now people may think that I will retire from competition, but this idea isn’t in my head,” Kim said. “I will consider competing in the 2016 Olympics to defend my title because I also want to be a back-to-back winner in the Olympics. I think less than 1 percent of judokas in the world have won two consecutive titles in both Asiad and the Olympics.”

While Kim led Korean men’s judo, Joung Da-woon and Kim Seong-yeon led the women’s team with golden performances. In the women’s under-63 kilogram competition on Sunday, Joung brought the nation its first judo gold at Incheon by defeating Yang Junxia of China by yuko in 2 minutes and 27 seconds during the sudden-death period.

“I can’t believe that I won a gold medal,” Joung said after the match. “I desperately wanted this title and am very happy for the outcome. I think it was more meaningful because mine was the country’s first gold in judo in Incheon. I will try harder from now on to prepare for the 2016 Olympics.”

Kim Seong-yeon won her first Asiad title at Incheon as well, beating Japan’s Chizuru Arai by waza-ari in the women’s under 70 kilogram final at Dowon Gymnasium.

The judo national team’s goal is to win its 100th medal at an Asian Games and they are steadily working toward that goal with 88 as of Sunday: 32 gold, 23 silver and 33 bronze.