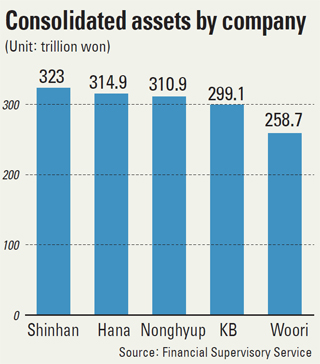 Financial holding companies’ performance in the first six months of the year improved slightly compared to the same period last year, according to a report yesterday by the Financial Supervisory Service (FSS).

The aggregate net income of the companies stood at 4.9 trillion won, up 110.7 percent from a year earlier. The growth largely stemmed from gains from the valuation and sale of securities, as well as a decrease in expenses associated with bad debt, the FSS report said.

Woori reported the largest net income of 1.34 trillion won, followed by Shinhan with 1.1 trillion won and KB with 772.2 billion won.

Troubled KB Financial Group, which suffered internal strife since April, sank to fourth in terms of assets. The financial group used to be the largest by assets.

The group’s performance failed to reach market expectations. Market analysts say the group has been overly reliant on its bank. Its failed attempt to acquire ING Life Insurance also affected the worse-than-expected performance. It is currently preparing to buy LIG Insurance.

KB Group Chairman Lim Young-rok was dismissed by the group board on Thursday after he was slapped with a three-month suspension by the Financial Services Commission (FSC) on Sept. 12. The FSC punished him for causing a feud with Lee Kun-ho, the former CEO of Kookmin Bank, the group’s main subsidiary, over switching the main computer system of the bank. Lee resigned Sept. 4.

Lim has filed a lawsuit against the financial authority, arguing that the punishment is unfair and he didn’t commit any illegal actions regarding the computer system change project.

However, because the board dismissed him, Lim will not be able to make a comeback even after the suspension. The group’s board has formed a committee to recommend the next chairman to lead the group.

“Such risks at holding companies are not directly reflected in group performances, but it seems like the risks do have a negative impact on growth,” an FSS official said. “Bank holding companies need to get rid of risks in governance and set up long-term plans.”

At the end of June, the consolidated Bank of International Settlement (BIS) capital ratio of the companies was 13.86 percent , down 0.08 a percentage point from 13.94 percent at the end of 2013.

This was mostly attributed to a drop in total capital due to a rise in the amount of capital instruments not included in regulatory capital under Basel III and early repayment of hybrid securities and subordinated debt, the report said.