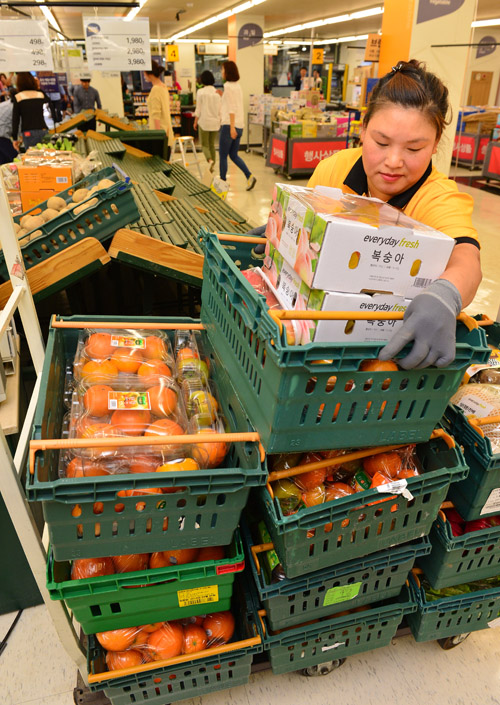 An employee removes items from the shelves yesterday at the E-Mart Everyday Junggok branch in Gwangjin District, eastern Seoul. [NEWS1]

Shinsegae, the country’s second-largest retailer, said yesterday that a branch of its supermarket chain E-Mart Everyday will stop selling 92 fruit, vegetable and fish items in order to benefit a nearby traditional market.

The company said the initiative will extend to three other supermarkets - Ilsan, Gyeonggi; Sadang in southern Seoul; and Myeonmok-dong in northern Seoul - that are located inside or close to open-air traditional markets.

The announcement was the latest in a series of moves to revitalize traditional markets that have seen their sales decline in recent years. Those efforts were typically led by the government.

An event to celebrate the step was held at Junggok Jeil Market in Gwangjin District, eastern Seoul.

Most of the excluded items overlap with the major products sold by small independent stores and street vendors in the traditional markets.

A Shinsegae representative said the supermarket chain will add items not handled in traditional markets like imported snacks and home appliances.

“I believe the decision will set a good example of how big supermarket chains and mom-and-pop stores can co-exist,” said Kim Hae-sung, head of the management strategy division at Shinsegae Group. “We will continue to seek ways to help boost the sales of traditional markets.”

As part of its efforts, the retailer will offer funds for store refurbishment. “We will choose shops that have good recognition among consumers,” said a representative of Shinsegae.

Total sales of traditional markets nationwide have declined by half over the past 12 years. In 2001, the sales of 1,438 markets stood at 40 trillion won, but the figure was 20.7 trillion won last year, according to a report released yesterday by the Small and Medium Business Administration.

In 2006, annual sales of stores in traditional markets went below 30 trillion won for the first time, at 29.8 trillion won. They have steadily declined to reach 21.1 trillion won in 2012.