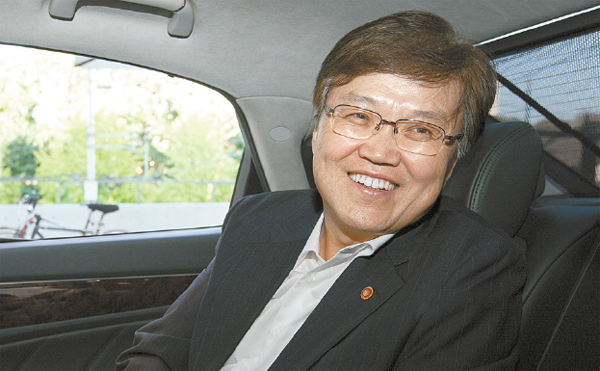 Choi Yang-hee, the minister of science, ICT and future planning, expressed his concerns about the Korean IT industry, the lack of planning for the future within his ministry, and plans to expand Pangyo Techno Valley at an all-day interview with the JoongAng Ilbo on Thursday. Provided by the ministry

He said the funds will be used to improve Pangyo’s infrastructure, fund start-ups, and build the second techno valley to allow more companies into Pangyo.

In an interview with the JoongAng Ilbo on Thursday, Choi, 59, unveiled his detailed plan of how the ministry will produce tangible results of the creative economy next year, two years into the Park Geun-hye administration’s campaign. The reporter shadowed the minister for a day, discussing ongoing issues at the Science Ministry.

Though confident in his policies, Choi was also frank enough to express his concerns that the Science Ministry still lacks long-term plans for the next 10 to 50 years, in contrast to the “future planning” part of the ministry’s name. But he said he hopes to start drawing up the blueprints during his term.

Q. It’s been two months since you took office. How has it been?

A. It’s actually been three months, including weeks to prepare for the conformation hearing. So far, I’ve spent most of my time visiting research institutes and meeting people who actually carry out our policies. The field experience helped me draw the basic and broad picture of the Science Ministry’s future.

I have experience working with many government officials, but it’s my very first time to be one of them full time. Government ministries are organizations that develop policies and enforcement ordinances, so I understand that they are conservative by nature. But I wish they could think more flexibly, think outside the box. Still, there are tons of regulations that prevent us from trying new policies.

Pangyo Techno Valley is an achievement of the Gyeonggi provincial government, and is being put together, developed and vitalized by the province. Some industry members criticize the current administration for simply taking advantage of the work already done by Gyeonggi.

That’s correct. Gyeonggi started building the techno valley in 2005, and it has already grown into a hot spot [for IT and digital contents businesses]. Many of my students are working at companies located there.

At the same time, there are many limitations to be solved. For example, many businesses have entered the IT district, but there is not much communication and cooperation among them. Prepared infrastructure is not utilized efficiently, either. From now on, the Science Ministry will help turn this into a true “Silicon Valley” by constructing efficient networks between companies and technology spaces designated for public use.

The Pangyo valley is also short of space. The Science Ministry will work with the Ministry of Land, Infrastructure and Transport to prepare enough space to open a second techno valley.

To make all this possible, the Science Ministry has allocated 30.8 billion won just for Pangyo’s resident companies. Of the 30.8 billion won, 10 billion will go to financing their R&D projects, another 10 billion toward their business and 10.8 billion to enhancing public-use infrastructure at technology centers. There are several centers that provide help on entrepreneurship skills, as well as cloud, big data and 3-D printing technology.

[According to sources at the Science Ministry, a portion of state-owned land located north of the Pangyo Techno Valley is mostly likely to be selected for the second IT area. The land is now blocked from private development because it’s part of a green belt, and is owned by the Korea Expressway Corporation and the Ministry of Foreign Affairs.]

The government’s recently decided to expand the number and size of its creative economy innovation centers nationwide. Some have criticized this as an alternative form of putting pressure on conglomerates to get involved.

Yes, it could have been viewed like this by critical eyes. But I hope the public pays attention to two major points.

First, these centers will operate nationwide, but most government policies so far have only had a real impact on Seoul and the greater Seoul area, like Gyeonggi and Incheon. Each of Korea’s 17 metropolitan cities and provinces will have one innovation center in their jurisdiction.

Also, the creative economy can be categorized as part of the economy [instead of simply being a government policy]. So the government’s role in this initiative is limited. The government hopes to see local start-ups thrive with conglomerates’ support in networking and business skills.

[Up to this point, Choi’s answers were very structured, as if he was reading from a textbook. But he started showing his own opinions when he visited the popular D. CAMP entrepreneurship center operated by the Banks Foundation for Young Entrepreneurs in Samseong-dong, southern Seoul. He asked the reporter, “Matching regional governments with conglomerates is not enough. I think D. CAMP is the ultimate model that the innovation centers should strive to emulate. What should we do?”]

The ministry is called the Ministry of Science, ICT and Future Planning in English. But frankly, we can’t see any futuristic side to the ministry’s organization or its policies.

I agree. I almost struck my desk when I first [took office]. One of the ministry’s crucial tasks is to set up Korea’s long-term strategy and vision. But we haven’t done anything so far.

We recently established a new task force that’s modeled on Singapore’s Risk Assessment and Horizon Scanning [RAHS] program. The team will build a platform that can help develop the nation’s future strategy.

The new Mobile Device Distribution Act comes into effect starting October. Do you think this law will help put the turbulent mobile telecom market in order?

It won’t just happen overnight. I think it will take at least a few months for people to see their household telecom bill become lighter. But with this act taking effect, I don’t think the market will get any worse.