SKT weaning itself off subsidies

SKT weaning itself off subsidies 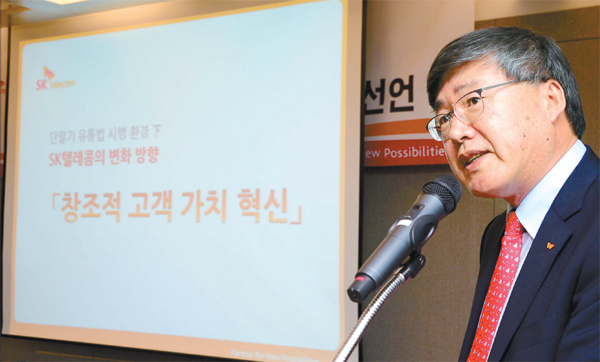 Park In-sik, head of the enterprise business division at SK Telecom, unveiled plans to cope with a changing mobile environment at a press conference yesterday at the Korea Federation of Banks, Jung District, central Seoul. [NEWSIS]

SK Telecom, the nation’s largest mobile carrier, announced yesterday it will shift its strategy to concentrate on existing customers, a week ahead of the implementation of the Mobile Device Distribution Improvement Act, which will ban illegal subsidy competition among carriers.

Park In-sik, executive vice president and head of the enterprise business division at SK Telecom, said the company will boost loyalty benefits and change policies to provide more advantages to existing customers, rather than to attract new customers, at a press conference held in central Seoul, yesterday.

Park acknowledged that the past focus on attracting new customers forced the company to spend more on subsidies on smartphones as the quality of its services continued to decline.

“The Mobile Device Distribution Improvement Act will become an important instrument to eradicate the abuse of smartphone subsidies and we will promote policies that will help all customers enjoy equal and reasonable services,” said Park. “Each mobile carrier will change their policies from attracting new customers to providing advantages to existing customers.”

SKT will expand its services and discounts for existing customers and long-term customers.

“We will expand the affiliates both offline and online to give membership services to existing customers,” said Park.

Each mobile carrier is in partnership with various affiliates from bakeries to movie theaters to convenience stores to provide discounts to its membership card holders.

“According to the subscription period, additional free services will increase and they will change according to customers’ consuming patterns.”

In addition, the mobile carrier will also launch monthly plans for wearable devices to keep up with the evolving market.

“A wearable device with a separate USIM will be launched and we are preparing packaging products and monthly plans for wearable devices,” said Yoon Won-young, marketing director at SKT.

According to SKT, when a specific manufacturer’s device and a mobile carrier’s service are linked, the market response is favorable.

“The T Kids Phone Joon introduced in July is selling 1,000 units a day thanks to various services, special apps and benefits, as well as dedicated monthly plans. If we only introduced the device, which was manufactured by a small and medium enterprise, consumers would not have responded in the same way,” said Yoon.

T Kids Phone Joon is targeted at children between the ages of 4 and 12 who are not able to navigate complicated smartphone functions. It looks like a digital watch with a simple user interface. By touching a single button, kids can make phone calls and parents can track their children using the phone’s GPS function.

SKT is likely to introduce Samsung Electronics’ Gear S smartwatch, which is the only wearable device with a separate USIM to run it.

In the meantime, SKT said it will also make public the technologies of its T Phone, the next-generation all-IP-based integrated platform it introduced in February, even to its competitors.

The new platform is equipped with various communication features that combine voice calls and data services. It lets users find the phone numbers of businesses and organizations through the 1 million phone numbers stored in the T Phone database without calling 114.

The service acquired more than 3 million subscribers in seven months since its launch.

Meanwhile, Park emphasized the need for a pre-approval system for mobile phone retailers.

Under the pre-approval system, mobile phone retail stores must receive approvals from mobile carriers to operate.