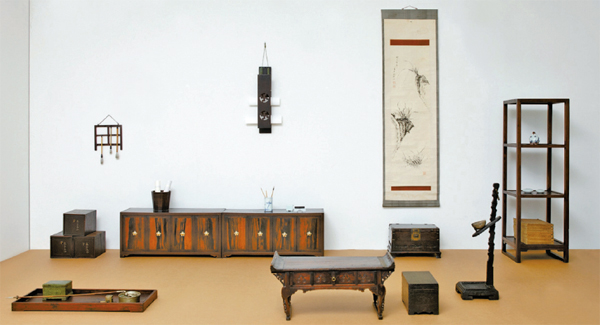 Ancient Korean art is an attraction at upcoming auctions. K Auction has recreated a sarangbang, a men’s traditional study room, above, where old stationery and furniture pieces will be sold. SeoulAuction, meanwhile, presents an armillary sphere from the late Joseon Dynasty (1392-1910), right. Provided by each auction house

This week, some important ancient Korean art - including a rare armillary sphere from the Joseon Dynasty (1392-1910) - will go up for auction.

Traditional Korean artworks are some of the main attractions at the 133rd Modern and Contemporary Art Auction, held by SeoulAuction, and the Autumn Auction, hosted by K Auction.

The former sale will take place at 4 p.m. today in Pyeongchang-dong, Jongno District, in central Seoul, while the latter will occur at 5 p.m. on Thursday in Sinsa-dong, Gangnam District, in southern Seoul.

The auctions come as ancient Korean art fans are lamenting the fact that Christie’s - one of the world’s major auction houses along with Sotheby’s - has decided to peddle Korean art through private, themed or online-only sales, instead of through the “Sale of Japanese and Korean Art” held every spring and fall.

Although Christie’s labeled the move a “new and expanded sales strategy for Japanese and Korean Art” in an April 17 press release, observers believe it reflects the declining popularity of ancient Korean art in the international arena while Chinese art emerges as a superstar and Japanese art enjoys continued interest.

Against this backdrop, it remains to be seen how popular ancient Korean artwork will be at upcoming auctions in their homeland.


Treasures up for sale

At the 133rd Modern and Contemporary Art Auction held by SeoulAuction, a total 270 pieces worth 10 billion won ($9.6 million) are up for sale. 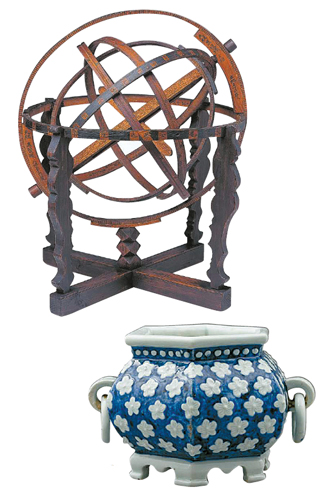 A blue-and-white hexagonal incense burner, also from Joseon, is another highlight of SeoulAuction’s event. Provided by SeoulAuction

Of them, 73 fall under the category of traditional Korean art, which includes ceramic pieces.

Organizers are particularly emphasizing the fact that two of Korea’s national treasures will be available for purchase. The first is a wooden armillary sphere - a rounded model that represents celestial bodies - from the late Joseon Dynasty. The item is Seoul city-designated Cultural Property No. 199.

The second item is a calligraphy piece from 1456, a crown prince’s covenant given to government officials who contributed Joseon’s foundation and other state affairs, and their children. The item is Seoul city-designated Cultural Property No. 97.

Officials say the item is well-preserved, in working order and structurally beautiful. Its estimate sale price is between 300 million won and 400 million won.

The calligraphy piece, on the other hand, is a scroll measuring 620 centimeters (244 inches) wide and 54 centimeters in length. It is the oldest covenant among those who contributed to state affairs. Interestingly, although the covenant has 239 listed names, only 157 signatures are seen. Historians suggest that some people refused to sign their names due to political divisions.

Besides the two treasures, a blue-and-white hexagonal incense burner stands out most among the 11 ceramic pieces that will be presented at the auction. The Joseon-era piece, organizers say, is a rare item with a strong contrast between its colors.

In line with the recent popularity of the movie “The Admiral: Roaring Currents,” which portrayed the Battle of Myeongnyang led by Admiral Yi Sun-sin (1545-98) in 1597, K Auction is presenting a drawing that depicts the Joseon navy training in waters off Tongyeong, South Gyeongsang. 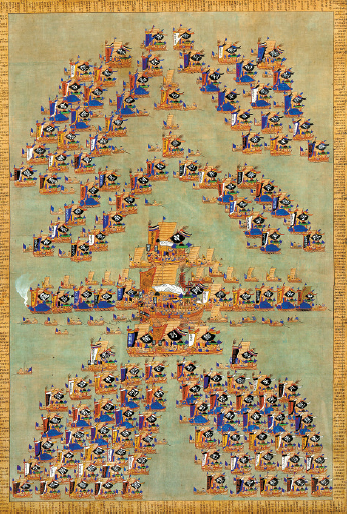 This unique drawing of the Joseon navy clearly shows the formation used by Admiral Yi Sun-sin (1592-98) in his final battle.Provided by K Auction

After the Japanese invasion known as the Imjin War (1592-98) - where Admiral Yi fought and made history - the Joseon navy held mass training sessions every spring and fall.

Based on its style, the drawing is presumed to have been sketched by a court painter in the latter part of the Joseon Dynasty. It clearly shows troops lined up in the shape of the Chinese character cheom, a naval strategy Yi used in the Battle of Noryang in 1598, his final battle, which he won against the Japanese. The strategy, which aids the movement of a large number of vessels, was favored by the Joseon navy afterwards.

Observers say the drawing is unique in that it’s drawn on a canvas, whereas other drawings of Joseon era naval training were made on folding screens.

The drawing is also the only one to contain extremely detailed written information about the Joseon navy, such as the number of troops, their bases and tools, among other things.

Also on sale is “Ode to the Korean Tea” written by Chouiseonsa (1786-1866), a Buddhist monk who is believed to have established tea culture in Korea. The material, which document the history of Korean tea as well as the effects of different types of tea, argues that Korean tea is just as good as Chinese tea and is an important artifact for the study of Korean tea.

K Auction has also created one section as a “Sarangbang Section,” referring to the sarangbang area used as a guest men’s study room in a hanok, or traditional Korean house. Some elegant wooden furniture pieces are displayed there and are up for auction.

“In Confucian Joseon society, thriftiness and moderation were considered virtues,” Son Yi-cheon, one of the publicist for K Auction, says, “so sarangbang was simple and neat but the woodenware and stationery they owned display their sophisticated taste and class.”

Modern and contemporary artwork by Kim Whan-ki (1913-74), Kim Tschang-yeul and Lee Dai-won are other highlights of the event.