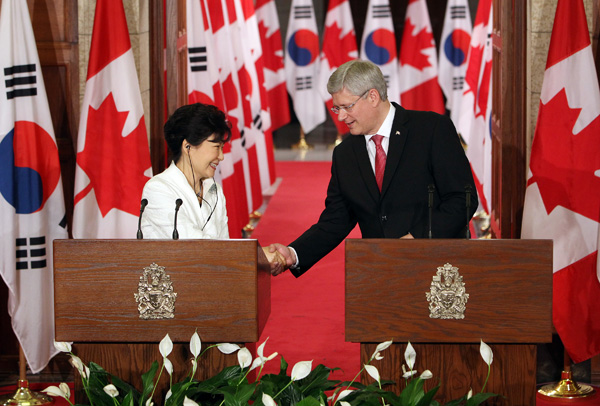 President Park Geun-hye and Canadian Prime Minister Stephen Harper held a summit on Monday in Ottawa and issued a joint statement spelling out the future direction of their bilateral partnership.

The summit was followed by a ceremony in which Yoon Sang-jick, the minister of trade, industry and energy, and his Canadian counterpart Ed Fast signed a Korea-Canada free trade agreement that officially made Canada Korea’s 12th FTA partner and Korea Canada’s first Asian FTA partner.

The two countries reached a deal on the FTA in March and signed an initial contract in Seoul in June.

“Korea and Canada, based on the friendship of the past 100 years, are writing a new chapter of history,” said President Park in a joint press conference after the summit meeting. “The Korea-Canada FTA will become a new growth driver that will maximize the bilateral partnership’s potential.”

The trade pact, forged after lengthy negotiations since July 2005, will take effect later this year once both countries’ parliaments have ratified it. The government plans to propose a bill for ratification in early October. The FTA will eliminate tariffs on 99 percent of items currently traded within 10 years.

“Following the agreement with Canada, Korea will have reached bilateral trade deals with nine out of 14 major economies around the globe,” said Ahn Jong-beom, senior secretary for economic affairs, in a briefing before leaving Seoul for Canada last week. He added that a pact with China is expected to be finalized by the end of this year.

Under the agreement, automobiles made in Korea will be sold tariff free starting in 2017. Cars account for 42.8 percent of Korea’s total exports to Canada. Tariffs on auto parts will also be lifted by 2017, as will tariffs on tires by 2019.

Canadian beef, which is currently taxed at 40 percent in Korea, will be freed of tariffs by 2030. Pork, which currently has a 22.5 percent tariff, will also become tax exempt in 13 years. About 19 percent of Canadian-produced agricultural products, such as rice, cheese, tangerines and ginseng, will either be excluded from the FTA entirely or it will take 10 years before taxes are eliminated.

The two leaders later signed an agreement that will lift limits on the number of flights and aviation routes between the two countries. They also forged seven memoranda of understanding in different fields, including energy technology exchanges and joint exploration of minerals at the North Pole.