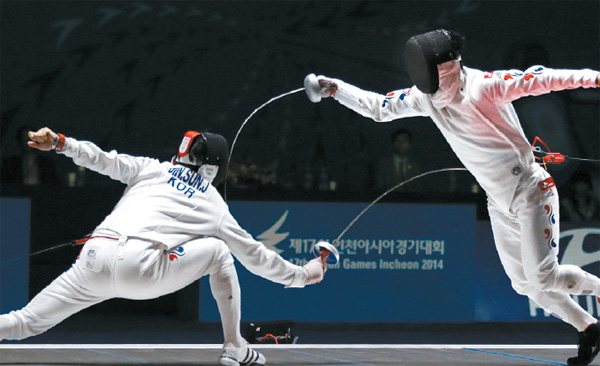 Kim Ji-yeon, right, stabs Shen Chen of China in the semifinal of the women’s saber individual at the Incheon Asian Games on Saturday at the Goyang Gym in Goyang, Gyeonggi. By Kim Kyoung-bin

There seems to be no Asian country that rivals Korea when it comes to fencing. In this year’s Asian Games, Korean fencers have managed to take six out of the eight gold medals won so far, along with five silvers and two bronze.

On Sunday, Gu Bon-gil, 25, defeated Kim Jung-hwan, 31, in the men’s saber individual final to win back-to-back gold medals in the event after the 2010 Guangzhou Asian Games. Jeon Hee-sook, 30, won another gold medal in the women’s foil individual in which Nam Hyun-hee, 32, won bronze.

And on Saturday, Lee Ra-jin, 24, won gold in the women’s saber individual and Kim Ji-yeon, 26, won silver. In the men’s epee individual that day, the gold was taken by Jung Jin-sun, 30, and the silver went to Park Kyoung-doo, 30.

The national fencing team is now aiming to get a better result than the 2010 Asian Games, in which South Korea earned seven gold, two silver and five bronze medals. There are a total of 12 gold medals awarded in fencing, including individual and team matches.

Korea has only recently become known for its fencing skills. The national team gained recognition at the 2012 London Olympics when it surprised Europe - the birthplace of fencing - by winning six medals, including two gold.

Korea’s sudden rise in international competitions was because of the team’s play based on quick steps. Koreans are usually smaller and shorter than Westerners so to overcome the disadvantage, the fencers increased their pace to 80 steps per minute, nearly twice that of European players. This means Korean fencers can move about five meters (16 feet) per second, allowing them to control distance from the opponent.

But the tactic didn’t work out at the Fencing World Championships in Budapest last year. The national team won only two bronze medals, a big step back since the London Olympics, because other countries came up with strategies to beat Korea.

So they began to add quicker hand movements along with the steps.

“The fencers could move faster thanks to the step practice, but it was true that their puntos got slower,” said the team manager, Shim Jae-seong, using the fencing term for a hit. “We thought their hands should move as fast as their feet.”

In the new method, the athletes hold their hands at their waists and move them to their steps. It sometimes looks like dancing, but it has helped them excel in Incheon.

The coaches thought practicing the step-and-hand motions would be boring, so they began to play K-pop songs while the team did drills.

“The step practice was the most physically demanding practice, but we now enjoy it because of the music,” said Lee Ra-jin.