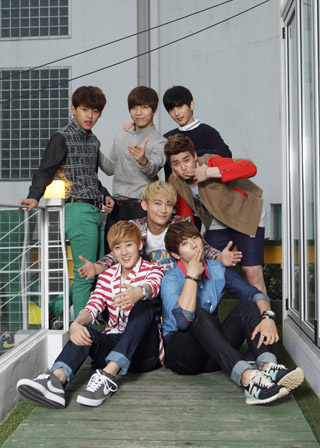 After releasing their latest album in early June, K-pop boy band U-Kiss has launched their first European tour Monday, starting with a concert in Moscow.

Titled “U-Kiss Scandal in Europe Tour 2014,” the tour will make stops in two other countries, England and France.

The six-member group will hold a concert in London today and another one in Paris on Sunday.

“The boys have launched numerous tours in the Americas,” an insider from the group’s agency, NH Media, was quoted as saying by Ilgan Sports, an affiliate of the Korea JoongAng Daily.

“The tour will hopefully provide an opportunity for U-Kiss to step closer to their European fans,” the insider added.

U-Kiss uploaded a photo of themselves onto their official Twitter account Monday, posing in front of St. Basil’s Cathedral in Moscow.

The tweet read: “Our first concert of the European tour in Russia! We have an hour left, and we’re so nervous. Wait a little longer! And here’s a selfie for all our KISSme fans, who are rooting for us from far away!”

KISSme is the name of the group’s official fan club. The group’s latest album, “Mono Scandal” (2014), came with the title track “Quit Playing.”