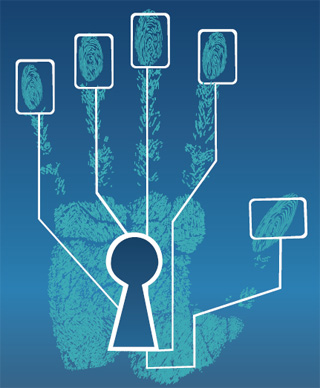 At restaurants or retail stores near Lund University in Sweden, customers hold up their hands at the cashier instead of rummaging to find their wallets. They then place their hands on a device that scans the individual vein pattern of each shopper’s palm, which therein starts an identification process.

Once approved, the amount due is transferred from a bank account and the customer can walk away, no need for cash or plastic. This new biometric payment system was developed by the Swedish start-up Quixter, founded by a Lund engineering graduate.

“Every individual’s vein pattern is completely unique,” he said in a statement, “so there really is no way of committing fraud with this system. You always need your hand scanned for a payment to go through.”

Biometric scanning is not a new phenomenon, but Quixter’s method - using vein scanning to allow shoppers to make point-of-sale purchases - appears to have opened the doors to the age of cash-free, smartphone-free and credit-card-free payments. Or at least it could soon.

Biometric payments are more high tech than mobile payments because they don’t require the user to carry anything extra.

The venture hopes to continue to expand the system’s use, and a few industries have already adopted similar biometric payment systems. Several hotels and resorts on Ibiza, the popular Spanish resort island, use a payment system with fingerprint recognition.

Additionally, some schools in Pennsylvania, New Jersey and West Virginia have implemented fingerprint identification in their cafeterias, according to a report by Time magazine. Students no longer need to keep track of lunch coupons, and it’s easier for schools to keep track of those who had lunch.

Once subscribed to what T-payservice provides, car owners can make payments at gas stations, toll booths and auto service centers. T-payservice, a Korean start-up, signed a contract with Shinhan Card last year and is looking to commercialize the service. The license plate recognition system takes away the hassle for drivers to get extra devices like the Hi-pass or to stop and pay.

The recent surge in hassle-free financial services is largely meant for convenience and timeliness. Lines at stores become shorter when customers don’t have to rummage through their pockets or purses for credit cards, and there is less worry about cards being lost, stolen or forged.

Right now, more focus has been put on these systems’ applications in other sectors, like security, telecommunications, human resources and marketing. However, some experts project similar services will greatly expand with the rapid advancement of biometric recognition technology.

“The fusion of financial services and IT is rapidly happening to the point that a word has already been coined for it - fintech [a combination of ‘financial’ and ‘technique’],” said Hong Jong-woo, the CEO of T-payservice. “In addition to lessening the time and danger [related to making] payments, it’s also meaningful in terms of cutting costs for making plastic cards and saving the environment.”

Still, hurdles remain in popularizing such services, those experts say. Customers are more familiar with credit cards and mobile cards, and it is rare that stores carry biometric scanners and readers.

There is also concern about theft and crime. In 2005, gang members in Malaysia attempted to steal a man’s Mercedes S-class by cutting off the driver’s finger to get around the car’s high-tech fingerprint recognition system, according to a report by the BBC.

“The expansion of payment methods using biometric means or wearable devices in a short period looks difficult, considering many realistic obstacles,” said Jung Hoon, a researcher at KB Financial Group’s Management Research Institute. “It’s highly likely that it will stay as the backup or alternative means for authentication for some time.”