Collateral damage from war on microbes

Collateral damage from war on microbes 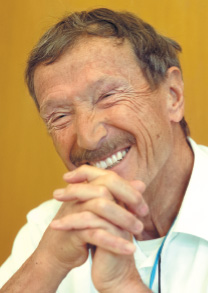 At the 64th Nobel Laureate Meeting, Nobel Prize winners from around the world had the opportunity to present their work and interact with young researchers to share high-profile academic information on recent scientific developments.

The conference, which has been held annually since 1951 in Lindau, a small town in southern Germany, focused on bioscience this year. 38 Nobel laureates specializing in physiology and medicine were invited, along with more than 600 emerging scientists and analysts.

I conducted interviews with four Nobel laureates who attended the meeting, one of the most important venues in which the scientific community can review current trends.

This is a four-part weekly series by the Korea JoongAng Daily.
Rolf Martin Zinkernagel is professor of experimental immunology at the University of Zurich. He was awarded the Nobel Prize in the category of Physiology or Medicine in 1996 for the discovery of how the immune system recognizes virus-infected cells. From his research, he found how a virus enters its host cell to replicate and reproduce and how T-cells, using receptors on their surfaces, actively search for viruses and attack them to contain them from spreading further as well as destroying them.

It was found that in order for killer T cells to recognize infected cells, they have to recognize two molecules on the surface of the cells, and these include the virus’ antigen and a molecule of the major histocompatibility complex (MHC). This has been traditionally associated with organ rejections in patients who had gone through an organ transplant procedure.

However, MHC has now also been identified as something which helps the body to fight off viruses such as meningitis. Some hope this discovery by Zinkernagel could also contribute towards fighting cancer, as the aggressive properties of the T-cells could be used.

Professor Zinkernagel studied medicine at the University of Basel and was awarded an MD degree in 1970. He received his PhD from Australian National University in 1975. He suggests that his studies will contribute to the work of others.

“Having studied medicine, I have always studied the basics of the human body for research, as strong foundations are important in any field of science,” he says. “This can lead to other findings in the future as others work with them and contribute towards a happier future of mankind”.

Q. Given the discovery of the role of T-cells, which in itself is a fundamental of immunology, how will the field progress?

A. If the fields of immunology and virology are to progress, then we should be able to develop ways to eradicate viruses that have entered the body as well as [to prevent] numerous forms of cancer. Quite a lot of recent research focuses on the development of such vaccines and they are making good progress.

How do you evaluate the achievement those human beings got through the war against microbes.

“Thanks to the research done on bacterial and viral infections, the way in which we treat such patients has become very flexible. However, the overuse and the abuse of antibiotics have led to development of these so called ‘super-bacterias’ that do not respond to treatments using antibiotics, as these bugs have developed a tolerance against them. Thus, it can be said that the progress we’ve made in this field can be reversed due to the development of such bugs. The question of what to do about this development is one that’s causing headaches for many.”

Many are worrying about multi-drug-resistant infectious diseases. What do you think is the way to solve this problem?

“This is because people have been foolish and they have been overusing antibiotics. People have developed the tendency to be dependent on such discoveries of science, and they have forgotten about nature’s tendency to evolve constantly. So to prepare for such changes we must never stop our research into the obscurest of fields as new diseases can develop and spread, as well as old ones [return], with deadly effect. For instance, take tuberculosis, which in the western world has ceased to exist. If it does spread we must be prepared.”