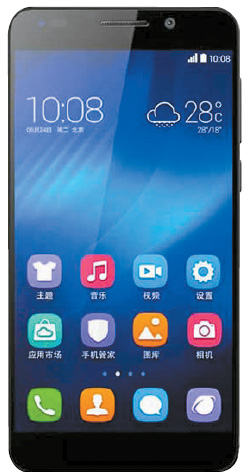 It will be the second major Chinese smartphone manufacturer to enter the Korean market since ZTE launched its Z phone through SK Telecom’s MVNOs in 2012.

The phone will be a modified model of Huawei’s top-of-the-line Honor 6, which can work on LTE-A and VoLTE (Voice LTE) networks.

“We have not yet decided the exact date of releasing the Huawei Honor 6, as we are still discussing with Huawei Korea the amount of orders and the prices,” said Yang Dong-kyu, a spokesman for Media Log, an MVNO subsidiary of LG U+. “The launch date is also not yet decided.”

The new Mobile Device Distribution Improvement Act will take effect on Oct. 1, and Korean telecom companies will be forced to stop competing with each other by issuing heavy discounts on smartphones.

As a result, Chinese manufacturers are getting more interested in competing on price in the Korean market.

The Honor 6 is equipped with the latest Android 4.4 operating system, but is about half the price of Korean smartphones. The Honor 6 retails for $300 to $400 overseas.

“As local manufacturers and mobile carriers will be banned from providing excessive subsidies on smartphones, Huawei phones will likely have a much greater competitive advantage over domestic smartphones,” said a smartphone retailer in Eunpyeong District, northern Seoul.

Honor 6 is not the only foreign-brand smartphone that will be entering the Korean market next month. Sony Korea yesterday held a media day at the IFC Mall in Yeouido to introduce its latest smartphones, the Z3 and Z3 Compact, which first appeared at the IFA exhibition held in Berlin earlier this month.

The company said preorders for the smartphones will start on Sunday on its website and Sony stores.

Sony Korea said it hasn’t set the retail price on the devices, but many industry experts are estimating the prices at north of 500,000 won.

Apple’s iPhone 6 is expected to arrive in the Korean market next month as well.

Meanwhile, Samsung Electronics is coming out with its Galaxy Note 4, which starts sales from Friday.

Although Samsung Electronics set the price of the Galaxy Note 4 in the mid-900,000 won range, the lowest among the Note series, that is still higher than Huawei’s Honor 6.

LG Electronics will continue to push its G3 and G3 Category 6 flagship models, along with the clamshell Wine Smart, which is targeted at a niche market.

It aims to further expand its market share, which reached 30 percent in the second half of this year.

Pantech is determined to maintain its 5 percent market share with the Vega Popup Note, exclusively sold by SK Telecom, although it has no plans to launch a new product as it is under court receivership.