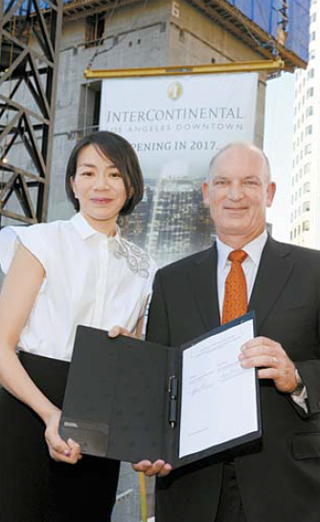 Heather Cho, left, president of KAL Hotel Network, with Kirk Kinsell, president of the Americas at InterContinental, yesterday at the construction site of The Wilshire Grand Hotel in Los Angeles. InterContinental Hotels Group will operate the hotel, a skyscraper worth 1.1 billion dollar, in downtown Los Angeles. It is currently being developed by Korean Air Lines and Hanjin Group. Provided by Hanjin Group

InterContinental Hotels Group, the U.K.-based owner of brands including Crowne Plaza, will operate a hotel in downtown Los Angeles in a skyscraper worth $1.1 billion, which being developed by Korean Air Lines and Hanjin Group.

InterContinental, Europe’s second-largest publicly traded lodging operator, will manage the 900-room, high-end hotel under its namesake brand, the Denham, England-based company said in a statement today. It will be the first U.S. hotel built by the Seoul-based air carrier.

“This hotel is representative of our brand and reflects Korean Air’s vision for a long time to come,” Kirk Kinsell, president of the Americas at InterContinental, said in an interview.

The 73-story, 335-meter (1,100-foot) building, to be the tallest in the western United States upon its completion in 2017, is part of a construction revival transforming the core of the country’s second-largest city.

The InterContinental’s check-in area, to be located on the 70th floor, will be the first sky lobby on the West Coast, the company said. The hotel also will have a spa, fitness center and open-air, infinity pool on the 73rd floor, Kinsell said. The tower will include office and retail space as well.

The downtown hotel will be InterContinental’s second namesake property in the Los Angeles area. The Los Angeles skyscraper will rise higher than downtown’s 310-meter U.S. Bank Tower, the tallest in the West.

It’s being built on the site of The Wilshire Grand Hotel, which closed in 2011 and was later demolished. The project was scaled back from plans for two towers - a 60-story office building and a 40-story hotel - announced in 2009.

The skyscraper is set to open around the same time as San Francisco’s Salesforce Tower, which, at 326 meters, will be slightly shorter than the Los Angeles building.