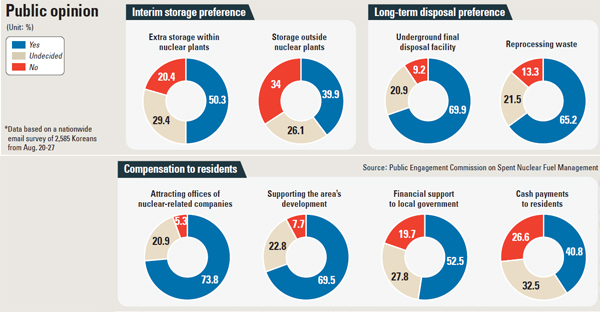 Long-standing and deep-seated distrust of the government has been cited as a main reason why Korea has failed to come up with a plan for the disposal of spent nuclear fuel, even as reactor pools are quickly filling up.

This distrust has roots dating to the Anmyeon Island incident of 1990. The Ministry of Science and Technology (now the Ministry of Science, ICT and Future Planning) deceived residents with plans to build an atomic energy research institute on the island off Korea’s west coast. However, residents later realized the government lied to them, that in truth it was looking for a site to build a nuclear waste repository. The minister resigned from office, and the plan was scrapped.

Five years later, Gulup Island in Incheon was identified as a candidate for the repository, but an investigation found it had an active fault and was vulnerable to earthquakes. The plan was abandoned.

When the Ministry of Trade, Industry and Energy took over the job of selecting a nuclear waste disposal site in the late 1990s, it started to accept applications from local governments whose foremost concern was financial compensation.

Municipalities hours away from existing power plants applied. In 2003, Buan County of North Jeolla was selected for its geological conditions, but area residents vehemently opposed the plan, going so far as to block roads. Again, the plan was dropped.

Technologically, it is least risky to build a repository in a municipality that already has nuclear power plants, said Anssi Auvinen, an engineering consultant at S&R, based in Helsinki.

“Korea still doesn’t have technology as advanced as that of other countries when it comes to transporting radioactive waste from one region to another,” said Cho Seong-kyung, a professor at Myongji University and commissioner of the Public Engagement Commission on Spent Nuclear Fuel Management (Pecos). “In addition, the government doesn’t have enough money to transport wastes, because it would have to build additional transport infrastructure, such as roads and special trucks.”

Due to a mix of such factors, Korea hasn’t continued the discussion.

Gyeongju, North Gyeongsang, home of the Wolsung nuclear power plant, was the only city whose residents agreed to build an underground facility to dispose of low- and intermediate-level nuclear waste, such as protective clothing and gloves worn by nuclear reactor workers or used in the radiology departments of hospitals.

The Gyeongju deal was sealed after the government promised compensation of 3.5 trillion won ($3.4 billion) and development projects to boost the local economy.

In Finland, Korean reporters asked officials and residents of Eurajoki what kind of compensation made the city council agree to accept a nuclear waste repository.

But the answers were somewhat different from what some might have expected.

“Because we get electricity from the nuclear power plant, we think the waste generated is also our responsibility,” said Vesa Jalonen, president of Eurajoki Municipality Council. “If all of Finland uses the electricity we produce, it is our municipality’s pride. We never thought of the underground repository as something we had to demand some compensation for.”

Nonetheless, city coffers benefit in a big way from the local nuclear industry.

Because local governments in Finland have taxation authority, Eurajoki Mayor Harri Hiitio said the city can levy higher property taxes on the nuclear power plant and final repository facility operators than on traditional industries like fishing, agriculture and some manufacturing.

“Eurajoki’s budget this year is 50 million euros ($64.2 million), of which the city procured a third from Olkiluoto, so we think the plant’s existence can be considered as a kind of benefit,” said Hiitio. “However, in principle, we didn’t agree to bring the repository into our community for financial reasons.”

More than 60 percent of the city’s annual budget is allocated for welfare and 15 percent does toward education.

“So with the nuclear industry,” said the mayor, “Eurajoki became a city that provides better resident welfare benefits than other municipalities of similar population.”