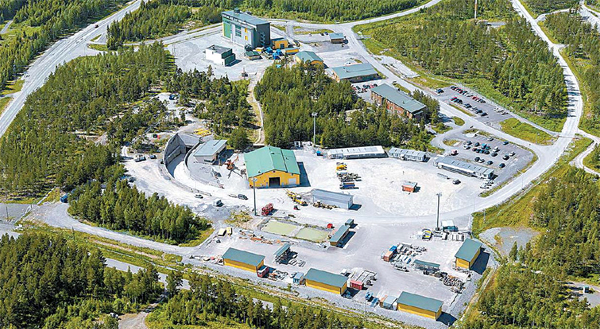 Finland’s future high-level nuclear waste disposal site is on Olkiluoto Island, Eurajoki, four hours southwest of Helsinki by car. Once licensed by the Finnish Ministry of Employment and Economy in January, construction will begin on waste disposal tunnels at the end of the existing access road. Provided by Posiva

OLKILUOTO, Finland - Amid a dense forest on Olkiluoto Island, part of the Eurajoki municipality and about a four-hour drive from Finland’s capital Helsinki, there is a six-square-kilometer (2.3-square-mile) site where 9,000 tons of highly toxic nuclear waste will be buried deep underground.

Finland operates four nuclear reactors, which supply 30 percent of the nation’s electricity. In 2001, it was the first country in the world to choose a final disposal site for nuclear waste.

A 9.5-kilometer road leads to where tunnels and burial holes will be built 437 meters (1,434 feet) below the surface. Posiva, a private company founded by the nation’s two largest nuclear power plant operators, held the groundbreaking for the repository in 2004. It will be ready to accept waste in 2022 and take 120 years to reach capacity.

Spent nuclear fuel refers to depleted uranium rods, and they are classified as high-level radioactive waste. They have a half-life of tens of thousands of years and generate heat at the rate of 10 kilowatts per hour for 100 years.

“I’m proud of this facility and its safety level,” said Janne Laihonen, investigation and research manager at the underground facility. “I’m sure the government will grant the construction permit for the repository, because I believe the facility successful.”

Laihonen said the holes, about eight meters deep, will hold waste-filled canisters and then be filled with bentonite clay. The clay swells with the moisture, preventing water and radiation leaks.

A 12-centimeter (4.7-inch) thick layer of shotcrete, concrete pneumatically projected through a hose at high velocity onto a surface, covers the ceiling and walls.

In relation to the 2022 time frame, about 10 percent of the disposal plan has been completed.

Because spent rods are hot, they first need to spend about 30 years in cooling pools inside reactors and then 40 years to 60 years in interim storage, usually outside the reactor but in the complex.

Of 31 nuclear nations, France, the United States and 20 others already operate interim storage facilities, but no country has entered the final disposal stage.

Still, from the perspective of Korea, which has no interim storage plan, Finland’s final repository project seems like something from the distant future.

Left: Holes at the Onkalo disposal trial site, located near the Olkiluoto nuclear power plants, are eight meters (26 feet) deep and 1.7 meters in diameter. Right: Four vertical shafts are for workers’ elevators, fresh air and copper radioactive waste canisters. At the end of the access tunnel, multiple horizontal caves will be dug.

“R&D projects continued through the state-run Korea Atomic Energy Research Institute [Kaeri] for years, but frankly, they haven’t made much progress,” said Cho Seong-kyung, a professor at Myongji University and commissioner of the Public Engagement Commission on Spent Nuclear Fuel Management (Pecos).

Because Korea is far behind schedule compared to other nuclear nations, the Ministry of Trade, Industry and Energy last year established Pecos in a bid to start raising awareness and eventually set up a schedule for building a final disposal facility.

The committee has communicated with the general public via its website and public hearings for the past year, and collected opinions and suggestions from stakeholders and experts.

In August, the committee’s advisory panel of 15 local experts released a statement saying Korea should simultaneously start preparing to choose a site and research techniques for building both interim storage facilities and a final repository.

The government estimates it will require at least 3.5 trillion won to build a repository, and last year it earmarked 400 billion won toward that goal.

Unlike Korea, Finland has made the process go smoothly. Finnish officials say the most significant factor is public acceptance, particularly by residents living near proposed repository sites.

According to an annual survey of Eurajoki residents by Energiateollisuus, an energy industry association, those opposed to the repository declined from 60 percent in 1984 to 34 percent in 2011.

At the center of increasing public acceptance is an independent advisory committee of nuclear experts called the Radiation and Nuclear Safety Authority (STUK). 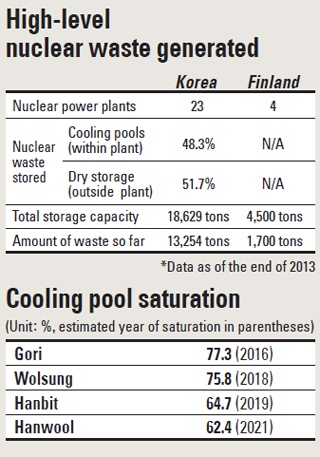 “[Our duties] are simple, but there is quite a lot of work,” said Risto Paltemaa, director of the regulatory nuclear waste management department at STUK. The authority is seen as the most trustworthy organization among nuclear stakeholders in Finland.

Since it was created in 1983, STUK has taken the lead in drafting safety regulations and a national plan to manage nuclear waste disposal. The committee also is in charge of safety inspections for nuclear power plants and waste management facilities, as well as publishing regular safety reviews and responding to residents’ emails.

Most importantly, the organization has the authority to halt operations at any facility.

“Giving veto power to the public is very important,” said Paltemaa. “It was not our agenda to say people should follow one opinion. We, the advisory committee, just guide the decision-making process by providing accurate, factual information.

“Also, updating people on the project’s progress is significant,” he continued. “Of course, this requires openness. Openness creates trust.”