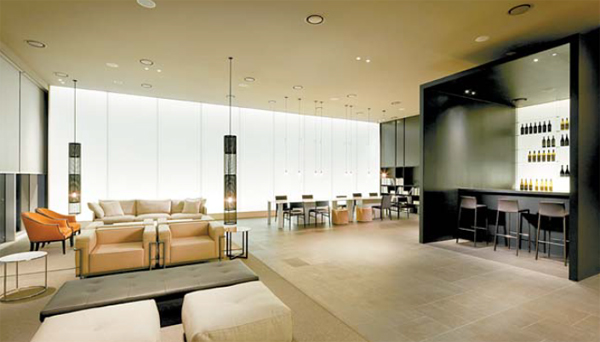 Hotel Shilla, a local five-star hotel chain, launched a business-oriented branch yesterday in Yeoksam-dong, southern Seoul - the first of its kind in the capital city.

Located near Teheran Road in the bustling Gangnam District, Shilla Stay has 306 rooms, along with amenities such as a bar, a fitness center and meeting rooms that can accommodate up to 30 people.

Although Shilla Stay is new to Seoul, its first branch is located in Dongtan, Gyeonggi, a newly planned city near Incheon International Airport that is only 30 minutes by car from Gangnam.

Shilla Stay aims to open in eight more regions across the country by 2016, including in Seoul districts such as Mapo, Guro, Seocho, Seodaemun, and elsewhere in Korea such as Ulsan and Cheonan.

The hotel’s Yeoksam branch was designed by Italian architect Piero Lissoni, who is known for his minimalist style.

Shilla Stay expects the Yeoksam branch will be popular with business travelers because of its geographical proximity to major convention centers like Coex.

Teheran Road is part of an area that the Seoul city government wants to turn into an internationally renowned convention hub.

The local government has drawn up a set of plans for the zone to be included in the world’s top three convention cities, an initiative also known as MICE (meetings, incentives, conferences and exhibitions).

“Shilla Stay is tailored to serve international business travelers as well as tourists at home and abroad,” said Kim Tae-hum, the hotel’s general manager. “So, as Shilla Stay is a business hotel, we will try to offer services at cheaper prices.”