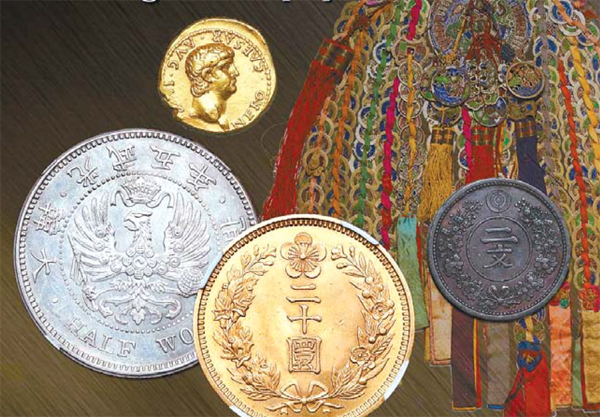 Clockwise from top: A gold coin with the Roman Emperor Nero; Imun bronze coin; the gold coin of the Korean Empire; eagle-stamped half won coin. Provided by the company

Poongsan Hwadong, the commemorative coin distributor and dealer, will host a currency auction Saturday featuring 800 old and rare currencies. In China, Europe and North America, rare currencies have attracted the attention of collectors and investors in auction rooms for many decades.

Recently, the popularity has reached Korea. Because of the high scarcity, historical value and liquidity those currencies hold compared to art pieces, the price and scale of the deals are on the rise.

In the auction held by Poongsan, 800 pieces of rare currencies with an estimated value of 1.8 billion won ($1.73 million) will be presented before the public. The items include: 111 coins from the Joseon Dynasty (1392-1910); 114 modern coins; 55 commemorative coins; 195 Korean paper moneys; 255 overseas currencies and 70 pieces of byeoljeon (commemorative coins) and yeolsoepae (decorated coins), which were used as charms or ornaments in the Joseon era.

For the very first time, the Hwadong auction will include the Imun and Omun bronze coins from the Taegeukhwijang sijuhwa series. The coins were used as prototypes for their design and metal. The series was made from materials imported from Germany in 1884. These coins are scarcely seen in the market, as only 30 sets were minted.

Other major goods include three types of gold coins and eagle-pattern coins from the Korean Empire (1897-1910) and 15 types of test-printed bills from the Bank of Korea.