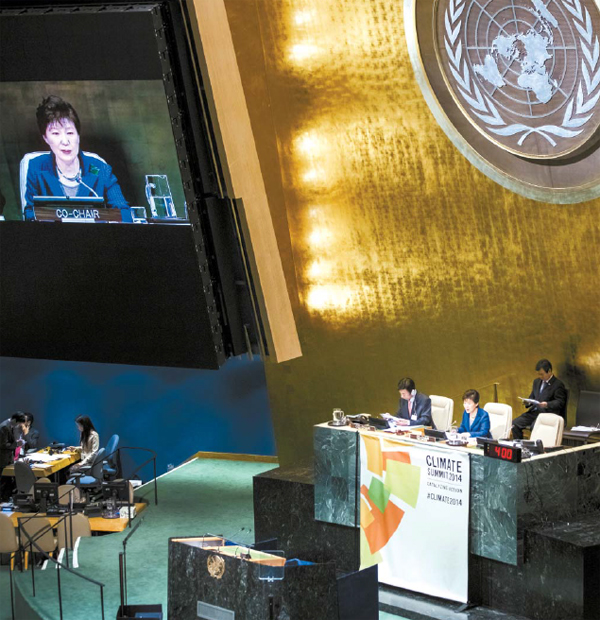 President Park Geun-hye speaks during a climate summit at the United Nations on Tuesday in New York. The summit, on the sidelines of the annual UN General Assembly, was designed to lay the groundwork for a new global treaty to tackle climate change in December 2015. She spoke again at the General Assembly on Wednesday. [NEWSIS]

Addressing the 69th United Nations General Assembly at UN headquarters in New York on Wednesday, President Park Geun-hye laid out her vision for a trust-building process on the Korean Peninsula, an initial step toward unification, and asked for support in resolving the problem of North Korea’s nuclear threat.

During a 15-minute speech delivered in Korean, Park introduced the two pillars of her foreign policy to bring peace and security to the region: the Northeast Asia Peace Cooperation initiative and the Eurasia initiative.

The president spoke about her yearning for peaceful unification of the two Koreas and appealed to the audience for more attention to the human rights situation in the North.

The audience included national leaders of countries from around the world.

She wrapped up the speech by praising Korea-born UN Secretary General Ban Ki-moon and expressed the Korean government’s willingness to consistently commit to the top international organization.

The president was also scheduled to participate in a UN Security Council meeting later in the day to be chaired by U.S. President Barack Obama. It will be the first time a Korean president joins the council meeting.

According to foreign media reports, Obama is expected to pursue a resolution to impose travel bans on foreign fighters intent on joining overseas wars.

While giving a keynote speech at the UN Climate Summit earlier on Tuesday, Park vowed to expand Korea’s contribution to the Green Climate Fund based in Songdo, Incheon, to as much as $100 million.

“The early capitalization of the GCF is vital to the launch of a new climate regime next year,” she said in the speech. “So we look to your contributions to the fund.”

The president said swift injections of financial resources into the key financial organization under the UN Framework Convention on Climate Change will be a crucial force behind the launch of a new climate initiative in 2015. Korea is already paying $50 million to the fund, she noted, promising to continue boosting the contribution to up to $100 million.

The fund is supposed to help poor countries adapt to the effects of climate change. French President Francois Hollande also promised France will contribute $1 billion to the fund.

The UN body’s secretariat was launched in the port city of Incheon last year.

“How we view the climate agenda - as boon or bane - will bring huge differences,” she said, adding that investing in the chance to unlock new energy industries and jobs can bring fresh engines of future growth.

In a separate session, the president unveiled Korea’s plan to implement a nationwide emissions trading scheme next year to encourage enterprises to trim greenhouse gas emissions.