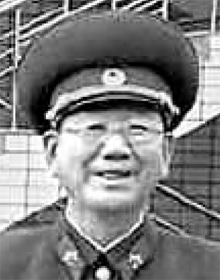 Choe Ryong-hae, a key confidant of North Korean leader Kim Jong-un once believed to be estranged from the inner power circle in Pyongyang, has been named to the country’s top sports post, succeeding Kim’s uncle who was executed in December.

The North’s Korean Central News Agency reported yesterday that Choe greeted the return of the North’s football team, which defeated the South in the final of the Asian under-16 football tournament last week in Bangkok. In the report, the North’s official state mouthpiece referred to Choe as a secretary of the Central Committee of the Workers’ Party and the chairman of the State Physical Culture and Sports Guidance Commission.

Established in November 2012, the commission was first headed by Jang Song-thaek, the young strongman’s once-powerful uncle. In December 2013, Jang was executed after being found guilty of attempting a rebellion against Kim’s dictatorial leadership.

It was the first time that the North has made public the successor to Jang’s old position of heading the sports commission.

Choe’s appointment also indicates that he is still playing an important role in the Kim regime, even though he had to step down from a top military post earlier this year.

Although he assumed the vice chairmanship of the National Defense Commission on April 9, he was soon replaced in May by Hwang Pyong-so as the director of the powerful General Political Bureau of Pyongyang’s Korean People’s Army, the military’s de facto No. 2 seat.

Speculation about his fall was extensive, though Northern media reported in July that he was sitting next to Kim during a national football team practice in preparation for the Incheon Asian Games.

A rare chance to analyze the changes in the reclusive communist state’s power balance will come today, with North Korea scheduled to hold a session of the Supreme People’s Assembly.

It will be the second time this year that the delegates of its rubber-stamp legislature will gather in Pyongyang. This year’s first session took place in April.

While the Supreme People’s Assembly normally holds a session once a year, important national agenda items are often discussed in additional meetings. Some observers have surmised that today’s meeting could be linked to the restructuring of power in the North, particularly considering Hwang and Choe’s new positions.

It is also thought that new policy initiatives could also be announced.

Outside observers say it will be an important opportunity to check on Kim’s well-being. The young leader has not appeared in the North’s state media since Sept. 3.