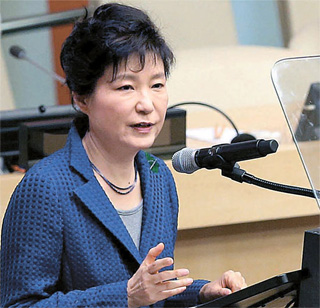 President Park Geun-hye on Tuesday delivered a keynote speech at the United Nations Climate Summit in New York, her debut on the UN stage as South Korea’s head of state.

In her address at the session, which was presided over by UN Secretary General Ban Ki-moon, she outlined Korea’s efforts to come up with new means for economic growth in conjunction with the country’s efforts to tackle climate change.

Those plans are in line with the Park administration’s signature creative economy initiative, which aims to transform innovative ideas into science- and technology-oriented business ventures.

The president promised that Korea will act as a bridge between advanced nations and developing countries when it comes to upcoming climate negotiations.

Representatives from nations worldwide have gathered in New York to lock in a new international climate agreement at the UN Climate Change conference in Paris next year that aims to prevent global temperatures from rising more than 2 degrees Celsius (3.6 degrees Fahrenheit).

The prospect of an interaction between Park and Japanese Prime Minister Shinzo Abe has attracted particular attention, especially considering they are staying at the same hotel and are set to attend a few of the same sessions.

Abe last week expressed hope that he and President Park could potentially meet at upcoming international conferences to discuss ways to improve strained bilateral ties. Park only said that efforts are needed on both sides to ease relations.

It was an unprecedented scene for two Korean-born leaders representing the world’s top nonprofit organizations to have spoken in the same venue in the presence of the Korean president. 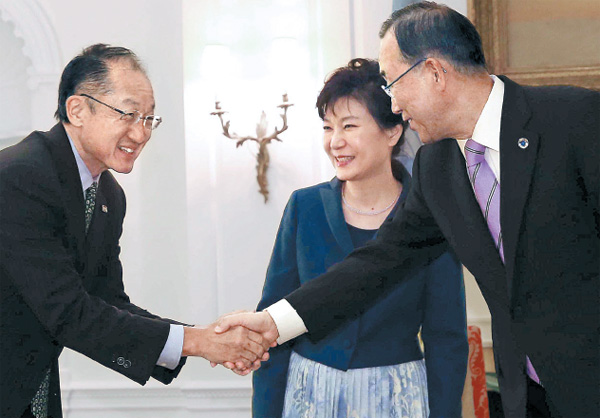 After arriving in New York from Ottawa on Monday afternoon, President Park visited Ban at his residence, their fourth meeting since her inauguration. They met last during the G-20 summit in Russia a year earlier.

Park told the secretary general that Seoul in August had proposed to Pyongyang that the two sides hold a second round of high-level inter-Korean talks and that it is still awaiting a response.

“Both Koreas need to meet and discuss impending issues,” she said, elaborating on her landmark Dresden Declaration in March while on a state visit to Germany, in which she unveiled her vision for a unified Korea. She also stressed South Korea’s willingness to continue delivering humanitarian aid to North Korea.

“Opening up the North’s heart by cooperating on smaller sectors step by step would be a good idea,” Ban replied.

He also asked for the Korean government’s vigorous participation in international initiatives to confront the Islamic State (ISIS) and curb the current Ebola outbreak in West Africa.

Although Ban has never articulated what he plans to do after retiring as head of the UN, conservatives in Korea consider him a strong potential presidential candidate to succeed Park.