Park must settle for silver in 100-meter freestyle

Park must settle for silver in 100-meter freestyle 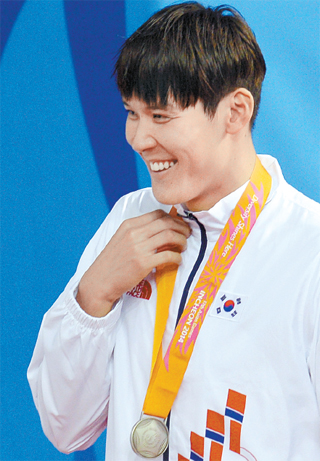 Park, who made an astonishing debut at the 2006 Doha Asian Games, winning three individual titles, also won three gold medals in the following 2010 Guangzhou Asian Games. But this year, he has lagged far behind his rival Sun Yang of China and Japanese rookie Kosuke Hagino, winning four bronze medals in the men’s 400-meter and 200-meter freestyle, and the 4x200-meter and 4x100-meter freestyle relay.

At Incheon, Park will compete in seven swimming events, including three team and four individual. Park will swim the men’s 1,500-meter freestyle on Friday, but it is not likely that he will take the gold since his rival Sun Yang of China is exceptionally good at the marathon-like event.

Sun, who has won two gold medals, and Hagino, who has taken three gold, did not participate in yesterday’s event at the Munhak Park Tae-hwan Aquatics Center, which is named after Park. But Park had other short-distance big shots to contend with.

Park advanced to the final yesterday by finishing the preliminary race with the best time, 49.76 seconds. He recorded a better result in the final, 48.75 seconds, but Ning set a new Asian record, finishing the race in 47.70 seconds.

Though he hasn’t won any gold this year, his five medals so far are meaningful to Park because he has often been compared during this Games to Sun and Hagino, who have private or government sponsorships.

After the men’s 400-meter freestyle on Tuesday, Sun Yang, who took the gold, said in the interview, “I got myself into trouble last year, but my sponsor, 361 Degrees, constantly supported me.” The statement made Park smile bitterly because he had to train without financial assistance.

Hagino is known as one of the athletes that the Japanese government is managing to prepare for the 2020 Tokyo Olympics in order to make a strong showing against the United States.

“The record was not very close to my best record, but swimming next to Ning and [Shinri] Shioura was a great experience for me,” Park said after the race. Park is on the verge of winning the most Asian Games medals of any Korean - he has 19 in total, including six gold, four silver and nine bronze, with chances to win more.

“This is my third Asian Games, but I’m not very satisfied with my performance this time,” he added. “But I still have more matches ahead, and I’ll do my best to get the best result as well as to become the holder of the most medals.”