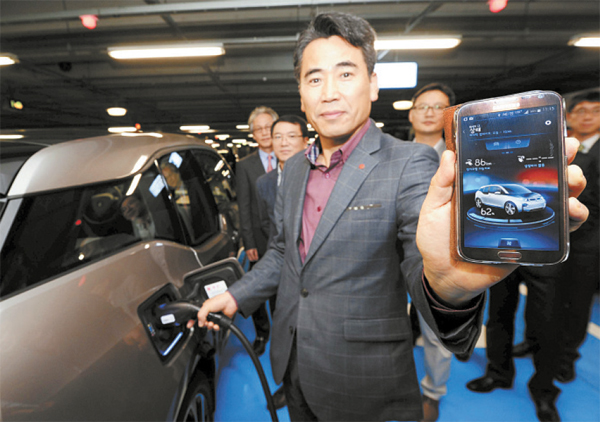 Proponents of electric vehicles say the cars are our future if we want to save our planet.

Ordinary consumers are on the fence partly because of a lack of infrastructure for charging the vehicles away from home.

Korea’s Ministry of Environment is turning to retail chains for a solution. They want to see people charging their electric cars while they shop.

E-Mart, the country’s largest discount chain, said that it began operating EV charging stations in 80 branches as of yesterday in partnership with BMW Korea, Posco ICT and the Ministry of Environment.

The three parties, which signed an agreement to expand EV charging stations in 2011, held a ceremony to celebrate the operations at an E-Mart store in Jukjeon, Gyeonggi.

The retailer offers the location while BMW Korea and Posco ICT operate the stations and chargers.

E-Mart said an electric car can run for around 50 kilometers (31 miles), roughly a 40-minute drive, on a one-hour charge.

Currently, 61 percent of Korea’s charging stations are located in either Seoul and adjunct Gyeonggi or on Jeju Island.

The new initiative, E-Mart said, will extend the availability of charging stations even to some far-flung areas.

The chain said it will set up EV charging points in new branches.

“I can’t say all new E-Marts will have this,” Kim said, “but many will because of the growing demand and popularity of electric vehicles.”

The Ministry of Environment said the number of electric vehicles continues to rise. In 2011, only 338 such cars were registered, which rose to 2,534 as of June.

E-Mart said the charging service will be free until Oct. 21. Afterward, drivers will have to purchase a membership card from Posco ICT, an engineering and IT company, and pay.