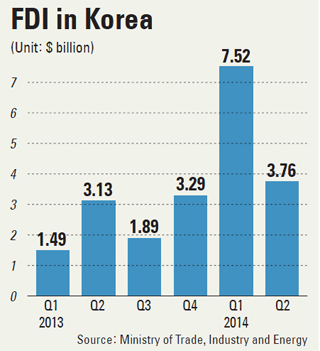 Korea’s net outflow of foreign direct investment (FDI) is mounting at the same time as local businesses are increasing their investments overseas, according to a Bank of Korea report released yesterday.

The report showed that FDI balance in the country has been dwarfed by Korean companies’ overseas investment since 2008.

It is too soon for the country to see such a quick turnaround in FDI growth, given the size of its gross national income (GNI), the report noted.

Theoretically, it is normal for a country with about $20,000 in per capita income to see increasing foreign investments. “Such a growing net outflow of FDI is unprecedented in any economy,” said the report. “The increasing amount of FDI outflow may affect the nation’s investment and employment conditions in a negative manner.”

Slow growth in FDI is becoming an issue as Korean businesses expand their plants overseas and invest more in other countries.

According to Dunning and Narula’s Investment Development Path, the current status of Korea’s FDI is in the fourth phase of the model, when outflow begins to surpass inflow.

In the first phase, from 1980-93, inward FDI surged significantly during the country’s economic development period, the model showed. The second phase from, 1994-98, witnessed a remarkable rise in outward FDI due to growing trade volume, income growth and the normalization of diplomatic ties with China. In the third phase, from 1999-2005, both inward and outward FDI grew due to the liberalization of the capital market.

“The government needs to ease regulations that hinder foreign companies’ investment in the country, first of all,” said Park Chang-hyun, a researcher at the central bank. “It also needs to make local businesses going to emerging countries make a U-turn to Korea.”