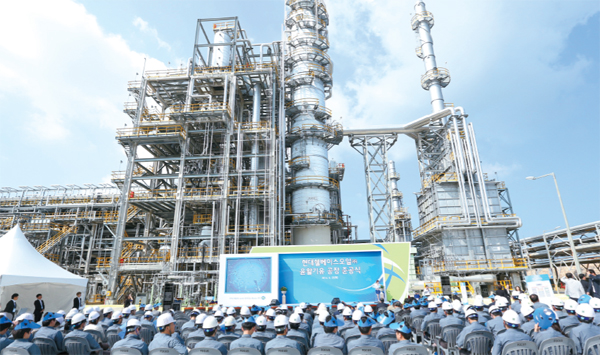 Hyundai and Shell Base Oil, a joint venture between Hyundai Oilbank and Shell, in Daesan, South Chungcheong, can produce 650,000 tons of lubricant base oil a year. Provided by the company

As a result, Korea’s top four refiners are now also competing in the lubricant base oil market in addition to the crude oil refining business.

Hyundai Oilbank and Shell invested in a joint plant that will be operated under the name of Hyundai and Shell Base Oil. It will process 20,000 barrels per day of heavy oil and will produce 650,000 tons of lubricant base oil per year.

Hyundai Oilbank, the affiliate of shipbuilding conglomerate Hyundai Heavy Industries, said it expects to earn an annual revenue of 1 trillion won ($959 million) from the plant.

Occupying 46,000 square meters (11.36 acres) of land inside Hyundai Oilbank’s Daesan plant, which is located 140 kilometers (87 miles) southwest of Seoul, its production facility was set up in July after 18 months of construction and has been doing test operations for the last two months.

“The stable plant operation know-how and refining technology from Hyundai Oilbank and the global network of the world’s largest energy company, Shell, will generate synergy,” Hyundai Oilbank CEO Moon Jong-bak said in a release. “We expect Hyundai and Shell’s lubricant base oil business to be a big contributor to Hyundai Oilbank’s effort to diversify its profit sources.”

Lubricant base oil is made after processing oil residue and is a basic material for lubricants.

The lubricant base oil market is growing as the popularity of lubricants is growing in emerging markets such as China, India and South America, the company said.

SK Lubricants, an affiliate of SK Innovation, is currently building a lube base oil plant in Cartagena, Spain, along with Spanish firm Repsol. S-Oil, the nation’s third-largest refiner, has recently introduced a new lube oil brand “S-Oil 7,” while No. 2 player GS Caltex is also trying to explore emerging markets.