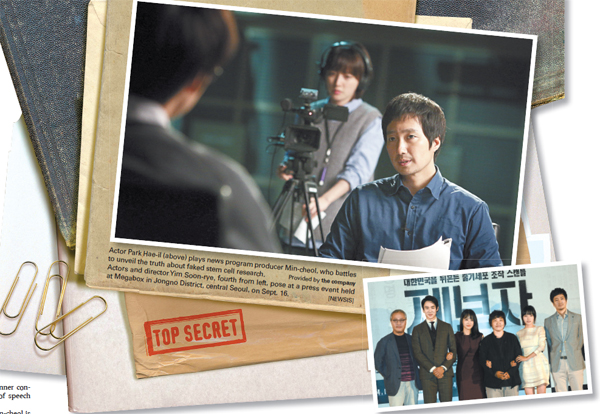 “This film is based on a true story, but please be informed that it is a work of fiction.”

In the past few years, this attention-grabbing introduction has acted as a guaranteed ticket to box office success, as shown in 2011’s “Silenced,” based on the horrific abuse of handicapped students in Gwangju, followed by “The Attorney” (2013) and “Han Gong-ju” (2014), which earned immense support, leading to protest campaigns and even legislative reform.

So the stakes were set high for Yim Soon-rye’s latest film “Whistle Blower,” inspired by the infamous Hwang Woo-suk scandal that shook the nation in 2005 when it was discovered that the scientist’s stem cell research was fraudulent and unethical.

As controversial as the incident was - and still is - the film is drumming up anticipation and concern even before opening.

And some potential viewers appear to be ready and waiting to criticize the filmmakers for distorting the truth about what really happened.

To their disappointment, it turns out that the film does not try to figure out whether the cloned stem cells really existed nine years ago, while it also does not attempt to justify the actions of the disgraced scientist.

Rather, the movie focuses on the time-transcending issue of the line of duty the media or journalists should fulfill. It stresses how hard they fight for the truth, and at the same time, how it can manipulate them.

In the end, the movie dares to admonish media power struggles and even the public, who unconditionally appear to believe everything the press says.

In the film, actor Park Hae-il plays Min-cheol, the chief producer of a news program.

After getting an anonymous tip off that makes him doubt the authenticity of Dr. Lee Jang-hwang’s stem cell study, Min-cheol hunts down the scientist, played by Lee Geung-young, to unleash the truth.

As a result, a power struggle within the press, political pressure and individual characters’ inner conflicts that curtail freedom of speech soon ensues.

Throughout the film, Min-cheol is depicted as a high-tempered maverick who is not afraid to challenge authority in return for the truth.

“Park’s character is what I consider an ideal figure of a reporter,” said director Yim during a press screening at Megabox in Jongno District last week.

“Dr. Lee’s character was who was really challenging. I didn’t want him to be either good or evil, but multidimensional,” Yim added.

Imbuing objectivity to each and every character, the 54-year-old director said that she focused on portraying the image of a journalist who rightfully battles for the truth.

As the audience is well aware of the true events the movie is based on, the story rolls out fast, leaving unnecessary parts that explain the characters and background information behind.

In the latter part of the film, Min-cheol desperately shows that it is a reporter’s job to provide verified facts to let the people determine for themselves about the reality behind an incident.

However, despite his efforts, the public condemns him as a traitor.

“I am curious about why the director decided to open the film now,” actor Park wondered during the press event.

“Maybe Yim thought that this particular event that happened in the past still has meaning in today’s society. Has there been any improvement?” he asked.

“As shown in the film, it is the public who has to feel and judge. If the audiences think about these issues after watching the film, I will be satisfied.”

The movie opens in local cinemas on Thursday.