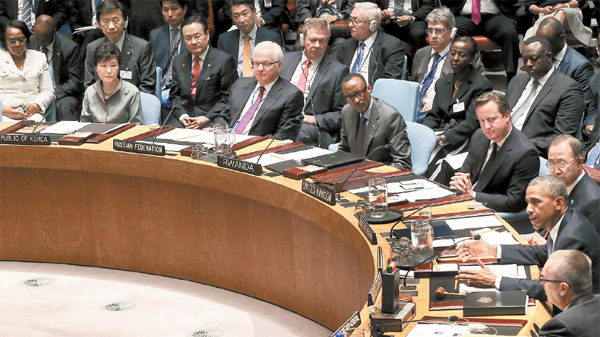 President Park Geun-hye, second from left, attends a United Nations Security Council meeting on Wednesday at the headquarters of the United Nations in New York, where heads of member countries were present to discuss a resolution cracking down on the Islamic State. By Park Jong-keun

President Park Geun-hye on Wednesday announced Korea would join a group of allies led by the United States in an effort to combat the militant Islamic State while addressing the United Nations Security Council meeting in New York.

“Terrorism that ignores rules of humanitarianism and murders indiscriminately, even the children and women, goes against the spirit of peace and generosity of Islam, and such uncivilized and anti-human acts are not acceptable,” the president said.

She recalled the tragic death of Kim Sun-il, a Korean man who was brutally executed 10 years ago by Islamic militants similar to the Islamic State, a Sunni jihadist group. He was kidnapped while working for Gana General Trading Company, a Korean company in Iraq under contract to the U.S. military. Videotaped footage of Kim being decapitated by the Islamic militants enraged the country.

Korea participated in the UN Security Council meeting for the first time, which made Park the first Korean president to deliver a speech there. Korea was one of 10 non-permanent members in 1996 and 1997, and again registered for a two-year membership last year. Kim Young-sam, who was president during the initial membership, did not make it to any of the meetings.

U.S. President Barack Obama chaired a rare leaders session of the council and all 15 permanent and non-permanent members unanimously passed a resolution that requires countries to pass laws against traveling overseas to join terrorist groups or funding any related efforts. The move came just two days after he ordered airstrikes on dozens of militant targets in Syria.

Addressing the UN General Assembly earlier in the day, President Park called for international attention to Japan’s mobilization of sex slaves during World War II by saying, “Sexual violence against women during wartime goes against human rights and humanitarianism regardless of time and region.”

She did not specifically mention Japan and the so-called comfort women, following the practice of refraining from pinpointing a nation on thorny issues on a multilateral diplomatic stage.

But a president bringing up the controversial comfort women issue was unprecedented and may signal her resolution to continue making an issue out of it. If so, some analysts doubt there will be a quick thaw of Korea-Japan relations, which have remained frosty ever since the president took office in February 2013.

On Sept. 19, Japanese Prime Minister Shinzo Abe expressed hope that he and Park could meet at upcoming international conferences to discuss ways to improve strained bilateral ties. Park only answered that efforts are needed on both sides to ease relations.

Imminent diplomatic talks may also be affected by the president’s UN remarks. A deputy foreign minister-level talk between the two countries is scheduled in early October and the nearly monthly meeting of working-level officials from foreign ministries of both is set to take place in the same month.

Park also urged North Korea to improve its human rights record and to end its nuclear weapons programs during the address at the UN General Assembly.

“North Korea should volunteer to give up its nuclear program and take the path of pursuing economic development and improved quality of life for its people,” she said.

That would prompt South Korea and the international society to provide more aid to the Communist regime, she said.

A day earlier, U.S. Secretary of State John Kerry slammed Pyongyang’s human rights abuses and urged it to shut down its political prison camps, which he described as an “evil system” at a ministers’ meeting on the sidelines of the General Assembly. He cited the findings a year before of the United Nations Commission of Inquiry on Human Rights in North Korea (COI).

The president wrapped up her weeklong trip after a closed meeting with heads of five key diplomatic think tanks in New York on Thursday.

According to the script the Blue House had released prior to the meeting, she was supposed to say: “Some view that Korea has been enchanted by China but that comes from a misunderstanding of the nature of the Korea-U.S. alliance. I hope this could offer a chance to destroy that perspective.”

However, Blue House officials told reporters three hours after the meeting Park did not say those words and asked them to delete the quotes from their stories.

Sources said the president did not have time to check the final draft until the last minute and decided at the last moment to scrap that part in fear of unnecessarily annoying China.

Exhausted from a tight schedule, Park took an intravenous solution in New York Tuesday night at the suggestion of her medical staff, sources at the Blue House revealed.

“President Park bore with a rigorous schedule ever since she arrived in Canada - from signing of the free trade agreement to taking part in several rounds of multilateral meetings and three bilateral summits,” said an official. “She only managed to sleep for two to three hours per day. Even her retinue found it demanding to keep up with the hectic schedule.”

The 63-year-old president completed 23 official schedules over the five-night, seven-day trip. She made an unusual confession to Blue House correspondents on Air Force One at the beginning that she was anxious about her packed itinerary.

This is the second time the Blue House has admitted the president used an IV. She caught a cold in March from fatigue in the course of preparing for a trip to Europe for a Nuclear Security Summit.

Sick in bed, she was forced to cancel a scheduled one-on-one meeting with UN Secretary General Ban Ki-moon and an IV was administered.