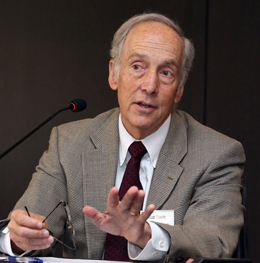 
A month after taking office, China’s President Xi Jinping reportedly declared: “No stop in reform, and no stop in opening up.” That was December 2012, almost two years ago.

How far has China come since?

Not so far. In fact, the world’s No. 2 economy has been focusing on its anticorruption drive, through which it probed at least 36 senior officials and found them guilty, according to Bob Davis, senior editor at The Wall Street Journal in Beijing.

At a forum hosted yesterday by the Institute for Global Economics, the Pulitzer-winning journalist spoke about the Xi administration’s priorities and the anticorruption campaign’s short-term impact on the Chinese economy.

“If you’re trying to understand China … forget about what they say and look at what they do,” Davis said. “It’s obvious their top priority is anticorruption … economic reform is a distant second.”

Fighting corruption may be the morally correct thing to do and good from the long-term economic perspective, but in the short term, “it is, without a doubt, a hit to China’s economy,” Davis said.

A Bank of America Merrill Lynch report released in April estimated that the country may be losing as much as $100 billion this year from the campaign. The effects are visible, according to Davis.

“In a city called Kaili [in the southern part of the country], you could see luxury housing was down,” he said. “A hotel owner said that their most expensive suites didn’t get rented anymore, because they were worried about how it would be perceived.”

In September 2013, the country’s first free trade zone opened in Shanghai, but it doesn’t have its regulations written yet, Davis said. And there are other economic problems to tackle, such as the excess capacity of industries, which “produce too much, no profits, greater bank debt.”

The problem isn’t “technically daunting,” but “it’s the anticorruption where [China] has all the efforts and money put in.”

“Economic reform is moving, but at a very slow pace,” the journalist said.

Although some optimistically speculate that the drive may solidify the grounds for economic reform, “it’s more likely that it will upset the cart so much that it will delay reforms,” Davis said. “And if you delay reform … you sort of run out of steam [for reform].”