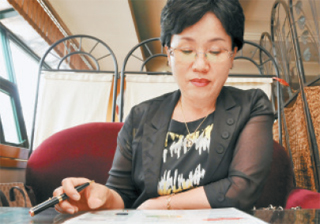 Lee Jo-eun, 54, who works as an insurance salesperson, goes to the gym every morning, the time when most other women her age typically prepare breakfast for their families.

She has been divorced for 10 years now and is among the 13.4 percent of single-person households in 2010 in which marital splits were the primary reason for living alone.

Statistics Korea expects that this figure will rise to 17.2 percent by 2035.

“Since I don’t have any family members to care for, I can spend my mornings for just myself,” she said. “Today, I should get going earlier because I have to attend a book club with other planners.”

After the book club, she arrived at her office just as the morning meeting was beginning. Overall, the atmosphere there was tense because insurance sales have fallen recently.

Lee started the job after her divorce, but it wasn’t easy to sell insurance packages to strangers. She works two jobs now, and still worries about her future. At 3 p.m. she heads to a health food manufacturer in Gwangjin District, eastern Seoul, where she begins work as a salesperson, a position she has held since last year. And while her life is not always easy now, getting divorced was an even tougher ordeal. She knows she is judged for it, sometimes stigmatized. For eight years, she didn’t even tell her colleagues.

“Divorce is on the rise, but there is still a strong prejudice against those who are divorced,” Lee said. “I’m sometimes lonely, but I enjoy it because I can plan my own life on my own.”

“I want to be confident for my children, too, who are staying with their father,” she added.